Aaron Torgalski has been recognized through his name tag as one of the two Buffalo, New York police officers seen shoving a 75-year-old man in a viral video that has been seen millions of times.
Torgalski’s name was visible on his police badge in the video. The other officer’s name is not still known. There isn’t another Torgalski listed on the Buffalo police force. A Change.org requests demanding that Buffalo police fire Torgalski has thousands of signatures.

The viral video saw more than 17 million times show Buffalo, New York police officers shove a 75-year-old man to the ground and then walk by him as he sleeps, bleeding from the head, on the pavement. Government salaries.com says, “Aaron Torgalski M in 2018 was employed in the City Of Buffalo and had an annual salary of $81,419.”

New York Gov. Andrew Cuomo and Buffalo’s mayor both issued statements about the event.
“This incident is wholly unjustified and utterly disgraceful,” Cuomo wrote. “I’ve spoken with Buffalo @MayorByronBrown and we agree that the officers involved should be immediately suspended pending a formal investigation. Police Officers must enforce — NOT ABUSE — the law.”
The video shows officers with face shields and batons walking down the street en masse. Officers appear to shove a man wearing a mask. He then falls down on the ground, where he lies motionless. “He’s bleeding out of his ear,” someone says, but the officers keep walking. One of the two officers has been identified because his name tag is visible in the video: Aaron Torgalski.

Send tweet to this address for the Buffalo Police.

Tonight, after a physical fight between two separate groups of demonstrators participating in an illegal demonstration beyond the curfew, two Buffalo police officers knocked down a 75-year-old man. The victim is in stable but serious condition at ECMC. I was deeply disturbed by the video, as was Buffalo Police Commissioner Byron Lockwood. He directed an immediate investigation into the matter and the two officers have been suspended without pay. After days of peaceful protests and several meetings between myself, Police leadership, and members of the community, tonight’s event is disheartening. I hope to continue to build on the progress we have achieved as we work together to address racial injustice and inequity in the City of Buffalo. My thoughts are with the victim tonight. 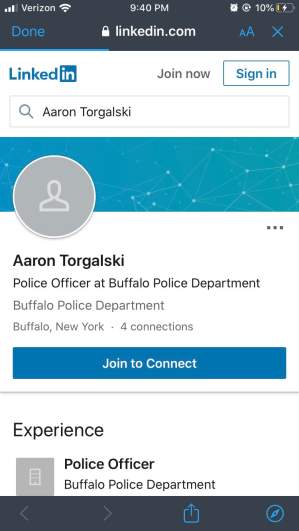 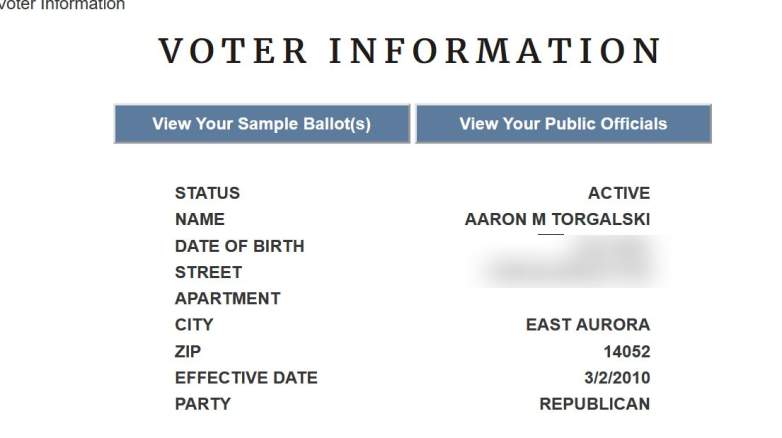