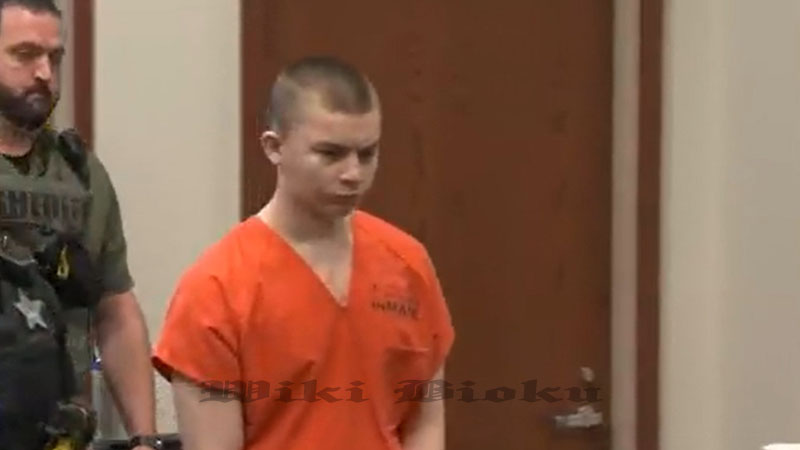 Aiden Fucci is a Florida boy who is accused of stabbing 13-year-old cheerleader Tristyn Bailey to death. A chilling Snapchat selfie photo of Fucci, taken after Tristan’s death, mentions the seventh-grade girl.

Fucci was an eighth-grader at Patriot Oaks Academy is now being held at the Department of Juvenile Justice. 13-year-old Tristyn Bailey was Fucci’s schoolmate and was in the seventh grade. Sheriff Robert Hardwick stated during a news conference on Monday, May 10, that the investigation is in the “very beginning stages” and did not release any details related to Bailey’s death, including the cause of death or how Bailey and the suspect may have been linked.

Aiden Fucci is a 14-year-old Florida boy who is accused of stabbing 13-year-old cheerleader Tristyn Bailey to death. A chilling Snapchat selfie photo of Fucci, taken after Tristan’s death, mentions the seventh-grade girl.

Despite his young age, authorities released Fucci’s name due to the seriousness of the charges. “We actually have arrested a suspect by the name of Aiden Fucci … a 14-year-old,” said St. Johns County Sheriff Robert Hardwick in a news conference. “He’s currently in custody with the Department of Juvenile Justice, charged with second-degree murder.”

Authorities have not yet decided whether to charge him as a juvenile or adult, according to News4Jax. Thousands of people have signed a Change.org petition urging the system to charge Fucci as an adult.

Tristyn was reported missing early Sunday morning, May 9, 2021, and her body was found by a neighbor later that evening in the woods, Hardwick said.

The St. Johns County Sheriff’s Department said in a press release that the chief medical examiner determined that the cause of death was “sharp force trauma by stabbing. The manner of death is homicide.”

Snapchat Photo Asks Whether Anyone Has ‘Seen Tristyn Lately’

Authorities are reviewing a Snapchat photo “showing a teenager in the back seat of a deputy’s cruiser,” according to News4Jax, which said police confirmed the teen in the photo is Fucci.

The news station reported that it was posted to Fucci’s Snapchat account. He is making a peace sign in the picture along with the caption, “Hey guys has anybody seen Tristyn lately.”

Fucci Had His First Court Appearance

Asked about this at the press conference, Hardwick said, “I will say our real-time intelligence center really has captured all these videos as much as we can. We monitor it.”

Fucci had his first court appearance on May 11, 2021. His parents, Jason Fucci and Crystal Smith were on the video call.

Tristyn’s Body Was Located in a Wooded Area

Hardwick initially would not release the cause of death, but authorities later said the girl was stabbed. Journalist Katie Jeffries wrote on Twitter that the “State Attorney’s Office confirms that Tristyn was stabbed more than once.”

The Sheriff said Tristyn was last seen just after midnight on Sunday.

An extensive search resulted. By that evening, her body was found in the woods nearby.

A security video shows two teens “walking east on Saddlestone Drive around 1:45 a.m.” Around 3:27 a.m., only one person, holding a pair of shoes, appeared to be walking on the video.

She had a “significant injury to her head and other trauma,” the news site reported.

She was found dead “on the south end of a retention pond.” He told his mother he took his shoes off “because his feet hurt,” the report says.

At 6 p.m. on Sunday, May 9, 2021, a resident “discovered Tristyn Bailey’s body that was actually located by a person in the neighborhood and called 911,” the sheriff said. “We went out there and recovered the body.”

The sheriff said, “We know the community is angry … they take this personally.”

He said the girl’s body was found in a wooded area and was clothed. A motive has not been released.

According to News4Jax, authorities searched a pond “near a cul-de-sac in the neighborhood near where Bailey was found” on Monday evening.

A diver brought an item to the surface, but it’s not clear what it was.

“We were able to obtain numerous search warrants which led to the location of multiple items of evidentiary value at the suspect’s home,” the sheriff’s press release said. It didn’t describe them.

The sheriff said both Fucci and Tristyn “attended the same school,” but it hadn’t been verified yet if they were classmates. They both attended Patriot Oaks Academy, a kindergarten through eighth-grade school located in St. Johns, Florida.

The sheriff said, “they grew up in the same neighborhood.”

“These kids went to the same school together,” Hardwick said.

He said there are “no further threats” to the community.

“The investigative team is out there interviewing all kinds of witnesses,” Hardwick said. “We have a suspect in custody. That is the only suspect that had to do with the death of Tristyn.”

Tristyn Was a Beloved Cheerleader in the Community

Bailey was a beloved cheerleader. “It is with our deepest sorrow that we inform you of the passing of our beloved athlete and friend, Tristyn Bailey,” wrote Infinity All Stars cheer team on Instagram.

“We ask for our Infinity family to pray for comfort, strength, and understanding for Tristan’s family and all of the athletes from our gym. This is just absolutely devastating for everyone who knew and loved her.”

Loved ones took to social media when Tristyn was still missing. “Tristyn Bailey, 13 years old, 7th grade POA left her home last night and has not been heard from since… love this kid like my own. We are heartbroken to not know where she is,” a woman wrote on Facebook.

Tristyn filled her Instagram page with photos of her cheerleading. One photo showed cheerleaders with a trophy and another mentioned homecoming.