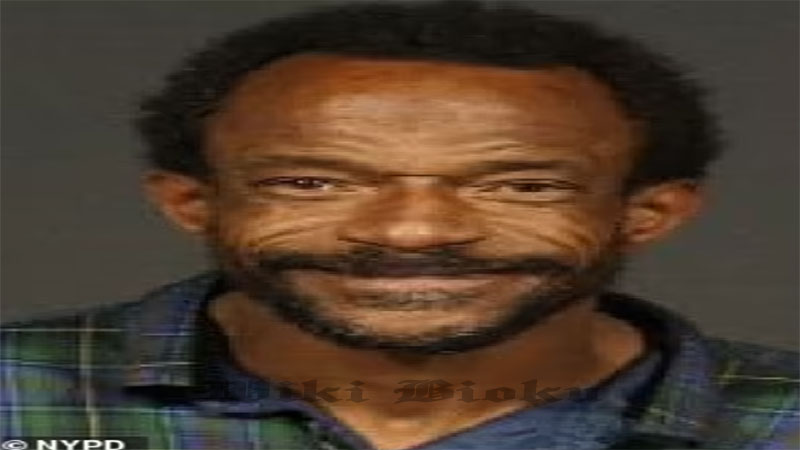 Alexander Wright is the homeless man who was caught on video sucker-punching an Asian woman in the face Monday has been arrested 41 times since his 17th birthday – including eight times in the past year alone, DailyMail.com has learned.

At his arraignment Wednesday, prosecutors highlighted Alexander Wright’s most recent arrests in recommending high bail to actually keep him behind bars this time, including an open case in the Bronx from last July.

‘In that case, the defendant is accused of striking a 72-year-old man in the face with a closed fist, causing the victim to fall to the ground,’ Manhattan assistant district attorney William Darling told the judge. ‘The victim, in that case, did then seek treatment at a hospital. He is currently released on his own recognizance. The defendant has failed to appear twice on that case and has been returned on warrants both times.’

Alexander Wright has been arrested 41 times since his 17th birthday in 1989 – including eight times in the past year alone.

‘The defendant pled guilty to two violent crimes in New York County only four days ago,’ Darling continued, one where he ‘threw a rock through a window, causing damage to the window, and minutes later grabbed a stranger by the face, scratching the victim’s face causing lacerations to his face and substantial pain.’

In the other, ‘the defendant threw hot coffee into the faces and eyes of two traffic officers, causing redness and substantial pain.’ He then detailed Monday’s assault, pointing out that Wright walked up to a complete stranger and ‘struck her in the face with a closed fist so hard that her hat flew off her head, she fell to the ground, and lost consciousness.’

‘Given the defendant’s record the viciousness of this attack, the People are currently recommending 364 days jail,’ Darling argued. Judge Angela Badamo agreed with the prosecution’s recommendation to set bail at $15,000 cash. Police records reviewed by DailyMail.com show Alexander Wright’s first arrest was a robbery in September 1989. He followed it up with an armed robbery that October, a menacing arrest in December, and another armed robbery the following April.

A troubled and violent man with a history of three suicide attempts, he’s been arrested for 15 felonies, 25 misdemeanors, and one violation. He’s been charged four times with resisting arrest, the records show.

His arrests run the spectrum from assault to criminal mischief, reckless endangerment, petit larceny, disorderly conduct, criminal possession of a controlled substance, public lewdness, menacing, criminal sale of marijuana, criminal contempt, and aggravated harassment. He’s been charged with five different assaults just since last July 19, when he allegedly slugged an elderly man in the face at a bus stop in the Bronx.

But it’s his most recent arrest that put him in the headlines after a video of the attack in Manhattan’s Chinatown surfaced on social media. It occurred in broad daylight on Monday afternoon when, unprovoked, he punched an Asian woman who was walking through her neighborhood and she fell to the ground. Wright was taken into custody and charged with assault, assault as a hate crime, and possession of the controlled substance.

Wright, whose last known address was a homeless shelter on Wards Island in New York, sports a distinguishing tattoo on his chest stating ”I LOVE MY MOM,” and for several of his arrests identified himself by an alias first name, Disney. Wright’s latest brush with the law comes amid spiraling crime in New York and criticism of de Blasio’s soft-on-crime approach. He slashed $1billion from the NYPD’s operating budget last year.

De Blasio says crimes have soared because the world was ‘turned on its head’ with COVID – but Big Apple residents aren’t buying that excuse. His 2020 bail reforms were intended to tackle the disproportionate number of poor people jailed for not being able to afford to pay bail. Those reforms see many suspects charged with serious crimes released back onto the streets without having to pay bail – with many subsequently reoffending while free.

One local told the New York Post: ‘We have a problem here, and the mayor is not going to pull the wool over every New Yorker’s eyes and say crime is down and we have homelessness under control. Let’s look at what’s happening here. Felony assaults – such as the one Wright now stands accused of – rocketed by more than a third over the last week to 483. That was a 35.3 percent increase on the 357 recorded during the same week in 2020.

Serious crime overall was up 49 percent over the last week, with a total of 234 reported – 77 more than the 157 flagged to cops for the same seven days in 2020. Police say the Asian woman was walking along bustling Bayard Street in Chinatown minding her own business on Monday afternoon before she was sucker-punched by Wright as he came along in the opposite direction. A surveillance camera captured the attack, which shows the woman falling to the sidewalk due to the force of the punch.

Several pedestrians were seen rushing to help her as she lay motionless on the pavement afterward. Assemblywoman Yuh-Line Niou, whose district encompasses Chinatown, shared the video of the attack on Twitter, which quickly went viral. Bystander Jin Zhen posted to Instagram, saying he ran to a nearby police precinct to alert officers who were able to track Wright down several blocks away.

The Chinatown attack came after other terrifying crimes were captured on camera in New York City over the Memorial Day Weekend and in recent weeks. Unsuspecting Big Apple residents have been violently set upon on sidewalks and in subways. Compstat statistics show transit crimes – those taking place on NYC public transport – rocketed by almost 162 percent in the last seven days.

A total of 55 transit crimes were recorded between May 17 and May 23 – far more than the 21 recorded over the same week in 2020. On Sunday, a 64-year-old man was cornered by a pair of robbers at a Midtown subway turnstile at East 59th Street and Lexington Ave. Surveillance video showed the two in distinctive, flashy footwear jumping the victim before punching him and cutting his face with a knife. Identified only as Brooklyn-resident H.M., the victim said he is done commuting to Manhattan after the vicious and unprovoked attack, ABC7NY reports. ‘I feel angry and upset and sad,’ he said. He had just finished praying at a Midtown mosque.

‘Hit me two times here, in this eye and this eye, and the other guy, he brought a razor,’ he added. ‘And the blood start coming and took the money from me and disappeared.’ He required 12 stitches on his forehead and the other two stitches near one of his eyes. He wore a COVID-19 mask during the Eyewitness News interview to obscure his identity out of fear that his attackers might come after him again.

Meanwhile, a teenage boy was killed and 11 others were left injured after a series of shootings in New York City across the weekend. The 15-year-old, identified by NBC New York as Amir James of the Bronx, was shot in the chest and killed in East Harlem around 10:30 pm on Monday night at Lexington Ave. and E. 123rd St.

Last week, New York Gov. Andrew Cuomo admitted New Yorkers don’t feel safe in their own city. ‘We have a major crime problem in New York City. Everything we just talked about, with the economy coming back, you know what the first step is? People have to feel safe. ‘We’re building new projects, stimulating new business – what comes before that is public safety, otherwise, none of it works. New Yorkers don’t feel safe and they don’t feel safe because the crime rate is up. It’s not that they are being neurotic or overly sensitive – they are right.

‘Subways are cleaner than they’ve been, operating better – but they’re not as safe and people are afraid to take the train,’ he ranted. He said that defunding the police – which de Blasio agreed to last summer by taking $1bn from the NYPD budget amid pressure from BLM activists – was not the answer. Meanwhile, hate crime attacks against Asians and Asian-Americans are also surging in New York.

At least 86 anti-Asian hate crimes being reported to authorities this year, according to the NYPD. There were only 19 such reports over the same period of 2020. In a separate attack, surveillance footage captured a man sucker-punching an elderly Asian woman last Wednesday. NYPD reported that it was working to identify the man who punched 75-year-old Wing Wa Chin near 57th Avenue and 97th Place in Queens. The vicious and unprovoked attack left the elderly woman with a broken nose, fractured eye socket, and two black eyes.

‘She was just coming back from the supermarket and she had her shopping cart,’ the victim’s son, who asked not to be identified in fear of retaliation, told CBS2. It’s kinda obvious. He punched her because she was an Asian lady,’ he added. A report from the Center for the Study of Hate & Extremism at California State University, San Bernardino, found that anti‐Asian hate crimes surged 149 percent across the US while overall hate crime dropped 7 percent in 2020. The report indicated that the rise in anti-Asian crimes was attributed to a rise in COVID cases and negative stereotyping of Asians relating to the pandemic.’ Former President Donald Trump was blamed for stoking anti-Asian sentiment by repeatedly branding COVID-19 ‘the China virus,’ and even ‘Kung flu.’

In light of all the recent citywide anti-Asian as well as anti-Semitic attacks, de Blasio announced increased funding for anti-hate initiatives. De Blasio announced the creation of a new initiative called Partners Against The Hate, or P.A.T.H. Forward last Thursday while committing $3 million in funding for Asian American and Jewish community groups, CBS reports.

The victim, 56, was rushed to a hospital for treatment and said to be in a stable condition. Afterward, NYPD Commissioner Dermot Shea condemned local laws that set Wright free even after numerous other serious allegations were made against him. In an interview with CBS New York, Shea blasted New York City’s bail laws- hailed by liberal Mayor Bill de Blasio – for repeatedly letting the serial offender straight back out on the street. He lives in a shelter, arrested eight times in the last year, randomly assaulting people, setting fires. The guy that was arrested on Friday setting fires. What are we doing in society, we’re releasing these people right back onto the street?’ Shea told the news network.