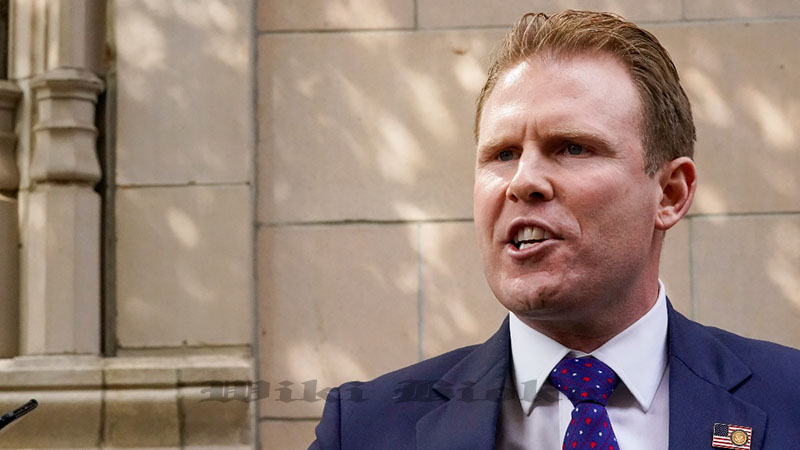 Andrew Giuliani is an American political aide serving as the Public Liaison Assistant to President Donald Trump. He is the son of Rudy Giuliani, Trump’s personal attorney and former mayor of New York City.

Giuliani attended Saint Joseph Regional High School in Montvale, New Jersey, and earned a Bachelor of Arts degree from Duke University, where he studied markets and management and sociology.

While at Duke, Giuliani was a member of the men’s golf team and planned on pursuing a career in professional golf. However, in 2008, Giuliani was cut from the team and sued the university, claiming, “his golf coach manufactured accusations against him to justify kicking him off the team to whittle the squad. The lawsuit was dismissed.

Giuliani was born to Rudy Giuliani and Donna Hanover in 1986. He has one sister, Caroline. His father was elected mayor of New York City in 1993, and he attracted attention due to his behavior during the oath of office. During the ceremony, Andrew would repeat parts of the oath along with his father. He was raised in the Catholic faith and was baptized by Monsignor Alan Placa.

On March 6, 2017, it was announced Giuliani would serve in the Trump Administration. His title is a Public Liaison Assistant in the Office of Public Liaison. In that role, helps arrange sports teams’ visits to the White House. He has also represented his office in White House meetings on the opioid crisis.

In August 2016, Giuliani announced his engagement to Zivile Rezgyte, a Lithuanian-born real estate account executive. They married in a Catholic ceremony at the Church of St. Joseph in Greenwich Village in Manhattan on July 14, 2017. He is a regular golf partner of Donald Trump.

Rudy Giuliani’s son, Andrew, announced Friday he has tested positive for coronavirus, a day after he attended a news conference with his father and other members of President Donald Trump’s legal team alleging baseless claims of widespread election fraud.

“This morning, I tested positive for COVID-19,” the younger Giuliani wrote on Twitter. “I am experiencing mild symptoms, and am following all appropriate protocols, including being in quarantine and conducting contact tracing.”

Andrew Giuliani, who serves as a special assistant to the president, is the latest member of Trump’s circle to test positive for a virus that has infected more than 11.7 million Americans and killed more than 250,000.

The news conference was held in a tightly packed room at the Republican National Committee headquarters on Capitol Hill.

The list of those close to the president who have been infected includes White House Chief of Staff Mark Meadows who tested positive earlier this month.

At Thursday’s news conference, Rudy Giuliani and other attorneys claimed without proof they had evidence of “voter fraud” and scolded the media for not presenting it. No court has yet agreed with their allegations and legal analysts across the political spectrum have predicted that various lawsuits are going nowhere.

Rudy Giuliani’s son started working as an associate in the Office of Public Liason in March 2017, according to The Atlantic. In 2018, his job, which involved organizing sports teams’ visits to The White House, earned him a salary of $90,700.