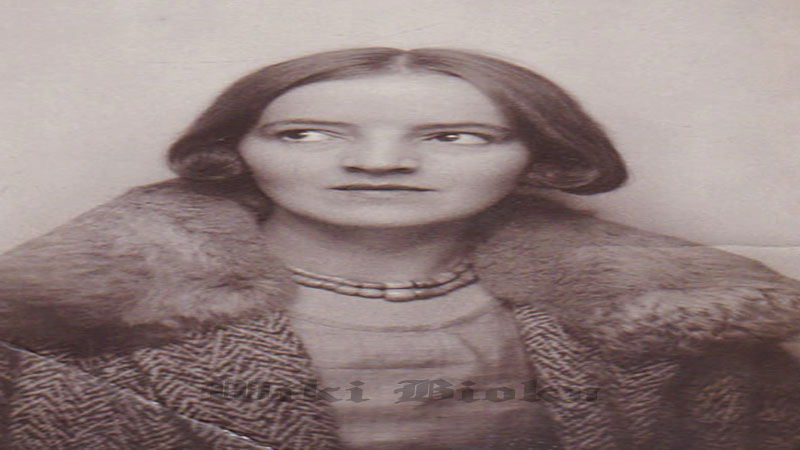 Barbara Hepworth was a Wakefield, England, artist, and sculptor who popularized direct-carving as a form of expression over pieces based on a model or design — she’s also the subject of Tuesday, August 25’s Google Doodle.

“Carving to me is more interesting than modeling because there is an unlimited variety of materials from which to draw inspiration,” Hepworth once said, according to the website of the Hepworth Wakefield museum.

Hepworth was born in Wakefield in 1903, studied at the Royal College of Art and in Italy, according to her estate. She has had exhibitions and retrospectives all over the world and was a key figure as a sculptor who worked in abstraction and found the final form of her works in the material itself rather than molding the material to resemble a pre-determined shape.

She began studies at the Leeds School of Art in 1920, where she met sculptor Henry Moore, who joined her at the Royal College of Art, and study trips to Paris, according to the museum.

Hepworth was born in 1903 to Herbert and Gertrude Hepworth, according to her estate. Her father was a civil engineer for the West Riding County Council, then the county surveyor, and Hepworth would travel with him as he drove around West Riding for work.

Those trips would inform her work, with its fascination with materials shaping form, she would later say in 1961.

“All my early memories are of forms and shapes and textures,” Hepworth said, according to the Hepworth Wakefield. “Moving through and over the West Riding landscape with my father in his car, the hills were sculptures; the roads defined the forms.”

Hepworth’s home and studio in St. Ives has been restored and serves as a popular tourist destination. Her family opened the spot to the public in 1976, per her wishes in her will, according to the estate.

According to the Tate Gallery, her stone-carving and plaster studios in the building have been largely unchanged and give visitors an authentic peek into Hepworth’s life and artistic process.

Hepworth pierced her first hole in sculpture in 1931; it was a small carving she had made, and it was revelatory to her, according to the New York Times. The whole would go on to have an outsize influence on modern sculpture and be a defining feature of her work.

“When I first pierced a shape, I thought it was a miracle,” Hepworth said late in her life. “A new vision was opened.”

The hole used negative space to explore balance in a sculpture’s form and guide viewers’ eyes, according to Christie’s magazine.

The title, and beautiful ovoid shape, of this art work, ‘Spring’, 1966, suggests Barbara Hepworth’s long-standing concerns with the cycles of nature & the promise of rebirth…

Her holes also had deeper metaphysical connotations, art, writers, and critics who would later note.

“Look into a Hepworth hole and you are looking at what matter normally conceals – everything that matter cannot express,” writer Jeanette Winterson wrote for the Tate Gallery. “A Hepworth hole is not only a connection between different kinds of form, or a way of giving space its own form — it is a relationship with the invisible.”

While studying in Rome in 1925, Hepworth met sculptor John Skeaping, who largely sculpted horses and other animal forms, according to the Tate Gallery. The couple was married in Florence’s Palazzo Vecchio and lived in Rome until 1926, when Skeaping fell ill, according to Hepworth’s estate.

After returning to London, Hepworth began showing her art at a studio and some galleries, and the couple had a son, Paul Skeaping, in 1929, according to the Art Story.

Although they each worked in different mediums, they shared an interest in abstract forms and influenced each other’s work, according to Widewalls magazine. They would travel to Paris often and met many modernist contemporaries, including Picasso in 1933, according to her estate.

They would remain married until October 1951.

In 1953, Hepworth’s son Paul, the only child she had with John Skeaping, was serving in the Royal Air Force, when he died in a flying accident over Thailand, according to her estate.

That year she carved a sculpture called Monolith (Empyrean) in tribute to Paul and his navigator, according to her estate.

Her work went on pause for a few years following Paul’s death, according to the Art Story, until after a trip to Greece, she started working in new materials in 1956. During this period she was often referred to as the greatest living female sculptor.

She was made a Dame Commander of the British Empire in 1965, according to her estate, and served as the first female trustee of the Tate Gallery.

Hepworth continued to work until 1975, when she died in a fire at her home and studio in St. Ives, according to her New York Times obituary. Firefighters found her body while knocking the blaze down.

She created around 500 sculptures in her lifetime.

Hepworth was died in a fire in 1975, according to her estate. She has had exhibitions and retrospectives all over the world and was a key figure as a sculptor who worked in abstraction and found the final form of her works in the material itself rather than molding the material to resemble a pre-determined shape.