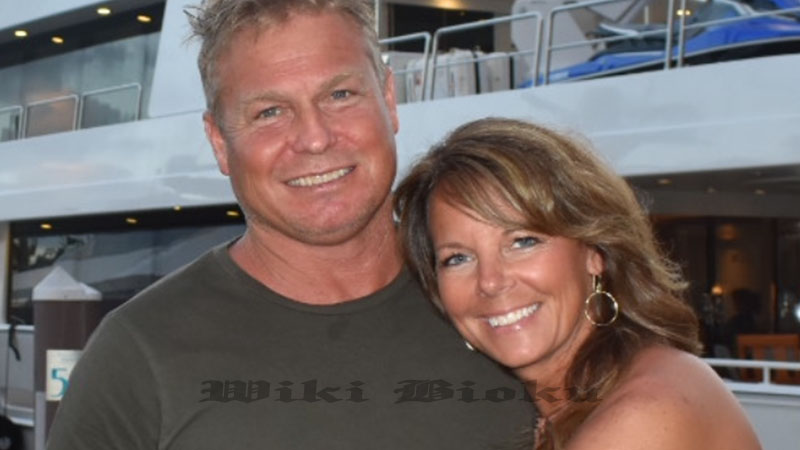 Barry Morphew is the landscaper husband of missing Colorado mother-of-two Suzanne Morphew who has now been accused of murdering her after she disappeared on a Mother’s Day bike ride.

According to Indiana business records, Morphew started a company called BLM Enterprises in 2004 and was listed as an agent with BLM Landscaping in Indiana. He wrote on Facebook that he was a volunteer firefighter in Colorado.

In a scene ripped out of the pages of a fiction novel or movie, where the husband acts like he’s part of the search for his wife only to be accused in her death, Barry Morphew, who has denied involvement in his wife’s disappearance, gave that appearance.

Barry Morphew presented like the grieving husband. He once posted a video plea on a Facebook group saying the following:

According to CBS, a family member claimed Barry was in Denver, 150 miles out of town, when his wife disappeared.

A cloud of community suspicion led to ongoing interest in his life the past year.

According to Daily Mail, “Barry was photographed with a mystery woman on two separate occasions back in February,” once having dinner.

Tisha Leewaye, Suzanne’s friend, said she seesawed about whether she suspected Barry before his arrest, according to the Denver Channel.

“We had invited him to a lot of the activities that we put together and they declined every time,” Leeway said. “When I got the news this morning, it was a good feeling that he was put behind bars. But it is still not over. We have got to go through the case, through the trial, through everything, But we still need to find her. She still needs to be brought to her resting place and she is not there yet.”

Chaffee County Sheriff Spezza said in a news conference that he wanted to speak briefly about Suzanne. He said he didn’t know her personally, but “now I feel I’ve gotten to know Suzanne quite well.”

According to Spezza, she loved the couple’s two daughters, and “there was nothing she wouldn’t do for them.”

“Suzanne had a passion for life and lived it to her fullest,” the sheriff said. “Suzanne was very easy to like and was cherished by her closest friends. People like Suzanne are a rare find.” He called Barry’s arrest a “major milestone in this investigation.”

Online records show Suzanne once started a non-profit called the Suzanne R. Morphew Hope Foundation to help children in need, although it’s not clear the degree to which it was active.

“It’s, it’s the hardest thing,” her nephew, Trevor Noel, told CBS4’s, Alan Gionet. “She’s a beloved member of her family and the sweetest person that you’ve ever met.”

In September 2020, Morphew’s brother organized a volunteer search effort to try to find her. Andrew Moorman told the Denver Channel: “My sister was murdered. And she was hidden within a three-and-a-half-hour window. So that — I can draw a circle on that and tell you she’s within that circle. And that’s what I know happened.”

Barry Morphew is the landscaper husband of missing Colorado mother-of-two Suzanne Morphew who has now been accused of murdering her after she disappeared on a Mother’s Day bike ride.

During the year-long search for his missing wife, Morphew positioned as a grieving husband, even recording a video saying to Suzanne, “I want you back so bad.”

Authorities haven’t found the 49-year-old Colorado woman’s body, but they moved ahead and arrested her husband for her death almost a year to the day she vanished without a trace after a neighbor said Suzanne went for a bike ride near the couple’s $1.5 million home in Salida, Colorado. Barry Lee Morphew, 53, is being held in the Chaffee County Jail, according to jail records.

“I wouldn’t bring charges if I wasn’t confident,” Chaffee County District Attorney Linda Stanley said in a news conference when asked about the strength of the case. But authorities wouldn’t give any details about what led them to suspect Suzanne’s husband or even that she is dead.

“It’s been a culmination of our investigation over the past year,” Sheriff John Spezze said. “We believe that she’s not alive. We’re in the process of filing first-degree murder charges.”

Morphew now stands accused of murder after deliberation; tampering with physical evidence, and attempt to influence a public servant.

Morphew asserted his right to a lawyer when authorities tried to question him, they said.

The sheriff said that thousands of hours of investigative work went into what he called a “comprehensive investigative effort” to find the mother who vanished on May 10, 2020.

“We’ve executed more than 135 search warrants across Colorado and interviewed more than 400 individuals in multiple states,” the sheriff said, adding that investigators plowed through more than 1,400 tips.

In early April, they brought the case to the DA in a multiple-hour presentation, outlining all of the evidence they had gathered. The DA reviewed it and decided to charge. Spezza called it an “important journey to obtain justice for Suzanne and her family.”

Barry Morphew has ties to a landscaping company, according to online records.

The Morphews lived in an affluent area considered so safe many people don’t bother locking their doors.

Journalist Amber Jo Cooper wrote on Twitter at the time of Suzanne’s disappearance, “I spoke with a few neighbors who do not know Suzanne personally, but tell me this is a very safe area and most people in town don’t even lock their doors. They say nothing like this has ever happened – that they are aware of. They say there are biking trails in the area.”

Some clues emerged. According to Daily Mail, her bike was found by a bridge near her home and a personal item, possibly a bike helmet, was found. Her husband claimed that an animal attacked her, that she was abducted, or that she had a bike accident, giving shifting theories for what happened to his wife, Daily Mail reported.

CBS reported that it was her nephew who revealed the bike was found; the sheriff said an animal attack was not likely even before the arrest.

The sheriff’s office did say five days after Suzanne disappeared that a personal item, believed to belong to Morphew, was found “just west of County Road 225 and Highway 50” leading searchers to scour that area. But her body was never found, and they never said what it was.

Morphew was alone at the time of his arrest and was arrested without incident. The Daily Mail reported that Morphew was now living in a modest condo and was continuing to work for his landscaping business.

The sheriff said that citizens throughout the county “wanted answers, and they wanted justice for Suzanne.”

Stanley confirmed that the “investigation is still ongoing. Her body has not been found. We are still looking at that. Barry Morphew is presumed innocent.” She said the arrest affidavit was “sealed at this time. We can not talk about an open and active investigation.”

She added: “Today is a good day. It’s a good day for all of the men and women in law enforcement who have tirelessly worked toward getting here, sacrificing more than any of you will ever know even as they were raked over the coals and second-guessed as to their skills and abilities. They never quit.” She said they “followed every lead, every tip, and every unanswered question.”

Suzanne filled her Facebook page with pictures of herself with her daughters and with Barry. “Made for each other!💞” one person wrote on a photo of Suzanne and Barry in 2018.

A friend declared her beautiful in one picture and asked how she never aged. “Thank you…You are SO KIND!😘 God is So Good!!” Suzanne replied.

Barry Morphew previously released love notes from Suzanne to him in an attempt to convince people of his innocence.

In 2015, a friend wrote on a photo showing Barry kissing Suzanne’s cheek, “You two are so cute!!!” The couple’s picture appeared to show a loving relationship.

The couple previously lived in Indiana. Barry listed Alexandria, Indiana, as his hometown on his now-deleted Facebook page and said that he attended Purdue University.

Their daughters are teenagers.

A GoFundMe page set up to help with search efforts says, “Please help raise funds for the search of Suzanne Morphew. Suzanne, 49, of Chaffee County, has been missing since Sunday, May 10th. She left home for a bike ride near County Road 225 and West Highway 50 and did not return. There are extensive search and rescue operations being undertaken by the Chaffee County Sheriff’s Office and Volunteers.” Barry Morphew is listed as a member of the fundraising team.

The sheriff said authorities don’t expect to make any more arrests in the case. The sheriff said in the news conference that Barry was “taken into custody near his home” in Poncha Springs around 9:15 a.m. on May 5, 2021.

The DA said that authorities think they know the scenario of what occurred but can’t release a cause of death without the body. KDVR-TV obtained video of Morphew’s arrest along the side of the road, where his truck was pulled over, and which you can see here and below: