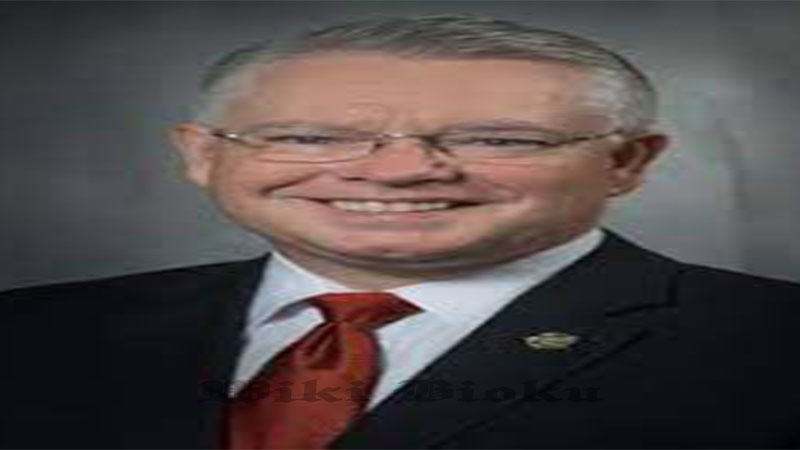 The former creative director of Turning Point USA, Caleb Hull, posted about Montgomery’s death on Twitter. Hull wrote in part, “Bill Montgomery was my best friend, my mentor, and someone I looked up to like a father for the last 5 years, but today he lost his fight against COVID-19.”

On his LinkedIn page, Montgomery referred to himself as Turning Point USA’s senior advisor, a role he had been in since June 2012. Montgomery says that he is based in Lemont, Illinois. On his Facebook page, Montgomery was from Peoria, Illinois, and was a graduate of Lincoln College.

Bill Montgomery has died at age of 80 years.

Montgomery is survived by his wife Edie as well as the couple’s two children, according to a statement from the group he helped to found.

Prior to the founding of Turning Point USA, Montgomery had been an advisor to various businesses in Illinois including an accountancy firm and a construction business. Montgomery was also a former restaurant owner and newspaper publisher. Montgomery called Turning Point USA on his LinkedIn page, “The most innovative youth movement in the USA.” Pro Publica reported in June 2020 that Montgomery left the organization in April 2020 after his term as board member expired.

The most recent visible Facebook posts on Montgomery’s Facebook page were critical of New York Congresswoman Alexandria Ocasio-Cortez while another highlighted gun violence in Chicago.

In a 2015 feature in The Atlantic, it’s written that Montgomery met Kirk during Benedictine University’s Youth Government Day in May 2012. The Atlantic reported that Montgomery watched Kirk speaking at the school and then told him, “I don’t know you but you need to start an organization to reach out to young people with your message.” Turning Point USA was launched a month later. Montgomery was also quoted by The New York Times as telling Kirk upon meeting him first, “You can’t go to college.”

A 2019 Washington Examiner feature on Montgomery’s meeting with Kirk describes the late activist as “making a pile in real estate and advertising.” In the same article, it’s written that Kirk had been planning to attend Baylor University. Montgomery attempted to get Kirk to take time off college with the university giving Kirk credit for starting his own group. Baylor University did not offer credit. The Examiner quoted Donald Trump Jr. as saying, “If it weren’t for Charlie Kirk, my dad would not be president of the United States today.”

Montgomery is quoted in the Atlantic article as saying that Kirk has the qualities to be the president of the United States. Montgomery also said, “Charlie is doing more in the youth movement than all of the other conservative youth organizations in the country. He is the future of the conservative movement in my opinion. And a lot of other people think that. That’s why we are raising the money we are.”

Glassdoor, a website where employees anonymously review companies, contains mainly positive reviews of working at Turning Point USA. One negative review is titled, “A mess since Bill Montgomery the co-founder was forced out.” The review is dated as being written in April 2019. There is no mention on Montgomery’s LinkedIn or Facebook pages of a hiatus from Turning Point USA.

In 2016, Montgomery mentioned that he had become the editor of a website named Freedom Fights. Freedom Fights is “powered by Turning Point USA,” according to the group’s Facebook page.

Kirk wrote a blog about what his relationship with Montgomery went to him on CharlieKirk.com in June 2019. Kirk wrote that, aside from his own parents, Montgomery was one of the few people to believe in him. Kirk said that prior to the launch of Turning Point USA in June 2012, the pair spent “hours” on the phone together. Kirk said that Montgomery went to Tea Party rallies during the summer of 2012 to solicit donations for Turning Point USA.

Kirk wrote that it was while the two were at the 2012 Republican National Convention in August of that year when Turning Point USA received their first major donation. Kirk added, “The truth is if Bill didn’t have my back, if Bill didn’t keep pushing me, this experiment would have failed, and with it the millions of lives we have impacted along the way.”

Bill Montgomery, the co-founder of pro-Donald Trump group Turning Point USA alongside Charlie Kirk, has died at age 80 following a battle with coronavirus.

Hull wrote that over the last two weeks, Montgomery’s health had been going “up and down and I just never thought it could be him that would go.” Hull described Montgomery’s death as “a huge loss for the world.” Hull concluded his remarks by saying, “I can’t wait to see you in heaven again.”

Charlie Kirk said in a statement to Politico regarding Montgomery’s death, “I can’t put into words how saddened I am by the death of my dear friend Bill Montgomery.”

It is with great sadness to share that TPUSA’s first believer and senior advisor Bill Montgomery has passed away. It was Bill and Charlie’s chance encounter in 2012, along with Bill’s generosity and willingness to…