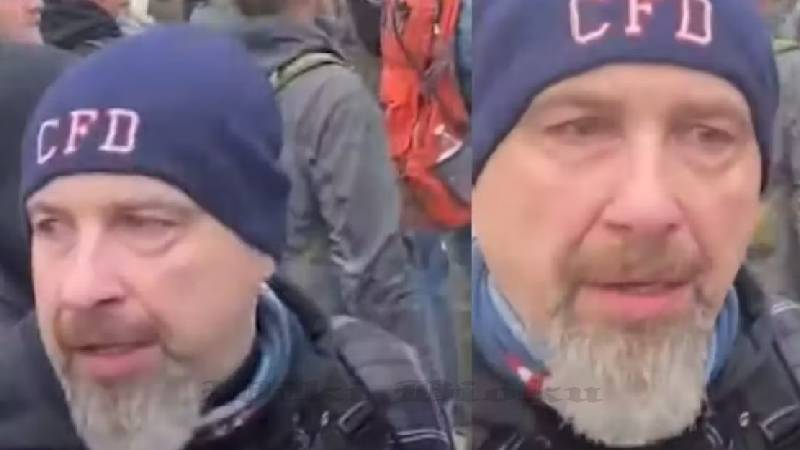 David Quintavalle is a retired Chicago Firefighter Departement (CFD) personnel who is alleged to be the man seen throwing a fire extinguisher at a police officer during the Capitol Protests on Jan 6th, 2020.

There was a show of support for Chicago police Sunday in Mount Greenwood, where many officers live.

Those who joined the Walk To Support CPD say it’s been a tough few months for officers.

From protests, to an uptick in summer violence, Chicago’s police force has been a flashpoint for demonstrators calling for change. But at Sunday’s Mount Greenwood march, the families and allies of the Chicago Police Department rallied for city residents to support those truly honoring the mission of serving and protecting.

A group of domestic terrorists stormed the U.S. Capitol as the Congress and Senate held a joint session to certify the November 2020 elections on Wed Jan 6th, 2021. The skirmishes left five dead, the Capitol Police officer, and four protestors. Another Capitol Hill Police officer died from apparent suicide days after the protests.

Quintavalle has no social media presence to ascertain that he is Trump Supporter, his brother, however, who goes by the name Keith Quintavalle is not a Trump Supporter as per his Facebook Posts. In March 2017. he wrote,

“President Trump, You are the sick and bad guy. You are unprofessional and degrading the office of President.”
The two brothers appear not to be on good terms if a Facebook post in 2017 is something to go by. His brother Keith wrote that David had acquired his mother’s property fraudulently and sold it. The Post reads.

He and his wife, Cynthia were in a rally was held in August 2020 at Chicago’s South Side Mount Greenwood neighborhood asking for support for the police. Cynthia and David Quintavalle’s 25-year-old son is a Chicago police officer, assigned to patrol the streets of Englewood. “I watch him every day, leave for work, praying he’ll be home in the morning,” Cynthia Quintavalle said.

“There’s so much being heaped upon them by these protests, things thrown at them, fireworks, everything, and they sit and they take it because they are the true professionals,” David Quintavalle said.

Back in Feb 2020, Quintavalle was among the protesters who hit the picket lines after promotional exams were canceled because of technical problems. Many carried signs Wednesday that said “exam scam 2020,” referring to the oral exams scheduled for roughly 1,600 firefighters vying to become lieutenants and 120 candidates for battalion chief. You can read the full article on ABC News here.

A video posted by TMZ shows a man throwing a Fire Extinguisher towards a Capitol Police Officer. One of the people who died from the riots was a police officer named, Brian Sicknick after he was hit by a fire extinguisher and tweeps were quick to connect the dots and ID a potential suspect.