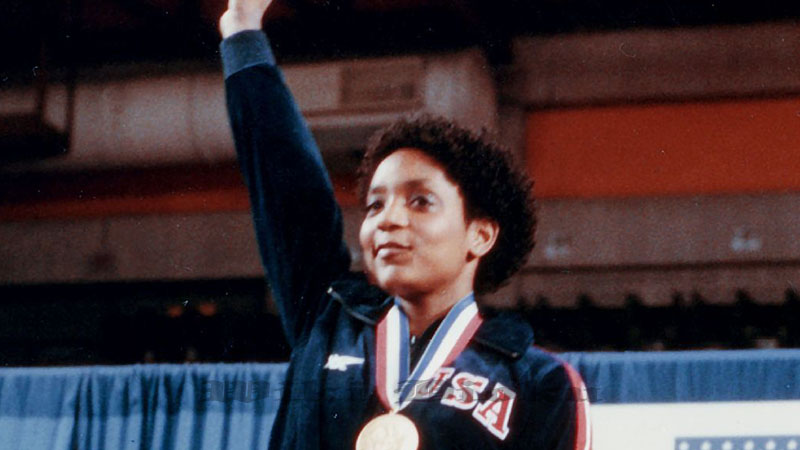 Dianne Durham, who was the first Black woman to be a USA Gymnastics national champion, has died in Chicago, Illinois, according to USA Gymnastics.

Durham was the first national champion in the U.S. coached by the famed Bela Karolyi, according to ESPN.

She was especially regarded as a powerful vaulter, the site reports, and she was a teammate of Mary Lou Retton.

“What she did is open the door and say any young girl, not any young white girl, can win and be great in this sport,” Paul Ziert, publisher of International Gymnast magazine, told ESPN of Durham’s accomplishments, which paved the way for other Black gymnasts’ successes, such as Simone Biles.

An ankle injury cost her the Olympic trials, and she was Retton’s most formidable competitor. In later years, she and her husband ran Skyline Gymnastics in Chicago, according to Gymn-forum.net.

Durham was born in Gary, Indiana.

According to Encyclopedia.com, the ankle injury cut a promising career short but not after many accomplishments. “One of America’s best gymnasts, she began taking gymnastics at a local Y when she was four years old,” the site reported.

She became a junior elite champion, won a silver at the McDonald’s International Championships,a nd then won the national gymnastics competition, earning gold in everything but uneven bars, according to Encyclopedia.com.

Dianne Durham has died at the age of 52-years-old.

Dianne Durham, who was the first Black woman to be a USA Gymnastics national champion, has died in Chicago, Illinois, at the age of 52, according to USA Gymnastics.

Durham died on February 4 in Chicago after a “short illness” that was not disclosed, and her husband also confirmed her death, according to NBC Chicago.

“I think between her and Mary Lou Retton, they felt they introduced more of a power gymnastics,” said Durham’s husband, Tom Drahozal, to NBC Chicago. “Dianne was a pioneer for Black gymnasts as well … She paved the way for others.”

“She passed peacefully,” Drahozal told ESPN. “She was the love of my life and everything I could have asked for. She was as beautiful a person away from gymnastics as she was within the sport.”

According to UPI, she died at a Chicago hospital with her husband and sister at her side.

In a statement, USA gymnastics wrote, “We are deeply saddened to share the passing of gymnastics icon Dianne Durham on February 4. Dianne dominated the 1983 national championships, capturing the all-around title en route to four gold medals (balance beam, floor exercise and vault) and a silver (uneven bars). In doing so, she became the first Black gymnast to hold the title of U.S. all-around champion.”

Tributes flowed in for Dianne Durham as news of her death spread. Here are some of the responses:

“Noooooo. I LOVED Dianne Durham … I am a huge gymnastics enthusiast and the exact same age as Dianne. I saw her compete live back in the 1980’s. What a terrible loss. RIP.”

“I’m heartbroken. Dianne was a bright light, a trailblazer. A sweet soul,” wrote journalist Felicia Middlebrooks. A few hours before Durham’s death, she wrote, “Asking for prayers for Dianne Durham, who paved the way for today’s top Black Olympic gymnasts and coached by Bela Karolyi. She was the first elite gymnast of the 1980’s and a Gary, IND native. I used to be her babysitter. She’s very ill, but fighting.”

A petition was started to get her into the gymnastics hall of fame.

“I am not remotely qualified to say anything of true substance on Dianne Durham’s passing, but the eloquence and poignancy of what has been written and said about her today is striking, and speaks to the legacy of a remarkable athlete who changed the sport for so many after her,” wrote another.

“We are heartbroken to learn of Dianne’s passing,” said USA Gymnastics CEO Li Li Leung in the statement. “As an icon and trailblazer in our sport, Dianne opened doors for generations of gymnasts who came after her, and her legacy carries on each day in gyms across the country. Our thoughts are with her friends and family during this difficult time.”