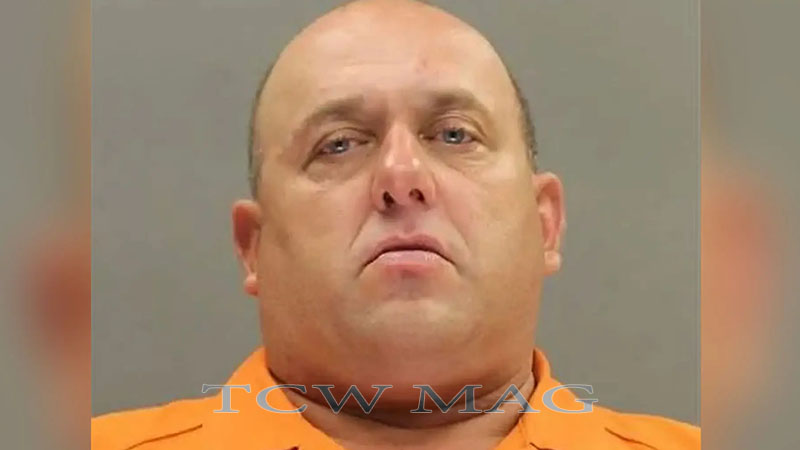 Edward Cagney Mathews is a Mount Laurel, New Jersey man who is being charged with harassment and partial intimidation after being caught on video “yelling racial and offensive slurs,” according to police.

You can watch videos of the original incident and his arrest below. Be forewarned that the original video is very disturbing because it shows Mathews hurling offensive racial slurs at his Black neighbors, even after a police officer arrives. He was taken into custody on Monday, July 5, 2021.

In a statement posted to their Facebook page, Mount Laurel Police wrote, “On Friday, July 2nd, at approximately 7:50 PM, a resident of the 3800 block of Gramercy Way reported that she is continually harassed by her neighbor, Edward Cagney Mathews, age 45. A disturbing video was widely circulated on social media showing Mathews shouting offensive and racial slurs at his neighbors. An investigation was conducted resulting in Mathews being charged with harassment and biased intimidation. The charges were placed on a summons by a municipal court judge to be heard at a future court appearance.” He’s listed as being in the Burlington County Jail in New Jersey.

A video shared by Michael Tucker on July 4 showed a man identified as Mathews in a verbal confrontation. On Facebook, Tucker says that he is an “Assistant Football Coach at Woodrow Wilson High School.”

“So why are you here?” Mathews, wearing a green T-shirt and shorts, said, getting in the neighbor’s face. The neighbor put his hands up and said, “don’t touch me.”

“Back up, back up, keep backing up,” Mathews said.

The neighbor called him a “monkey, white monkey” after Mathews called him the racial slur. However, Mathews continued hurling racial slurs at the man, repeatedly calling him the N-word.

Mathews said he was going to wait for the cops to show up, calling his neighbor a “dumb ignorant n*****.”

“That’s all you know how to do, walk up and harass people,” the neighbor said.

Mathews said, “Learn your law. This is not Africa.” He claimed he was standing on “common ground” on the sidewalk.

The neighbor said he was born in America. Mathews claimed he was going to “press charges.”

Mathews claimed he was going to walk the police of the property.

Tucker wrote on July 4, “This is not my video; I did not record it. However, this is happening in Mount Laurel New Jersey. This is what my family and I are currently enduring. As you can see Mount Laurel Police Department was called, but nothing was done.“

“Cagney cut it out now,” the officer said. “Relax.”

“Cagney go home. I’ll talk to you in a minute,” the officer said.

Here’s a video of him being taken into custody as protests surged outside his home. A citizen video showed police leading Mathews out of his home through a phalanx of protesters.

Police stressed that they won’t tolerate the behavior.

“The Mount Laurel Police Department does not tolerate hate or bias intimidation in any form. This type of behavior is totally unacceptable. We can assure our residents that incidents like this are thoroughly investigated and that those who commit such offenses will be held accountable for their actions,” they wrote.

“We are actively investigating other incidents involving this suspect. If anyone has information on these incidents, you are kindly asked to contact Mount Laurel Police Department at 856-234-8300 or the confidential tip line 856-234-1414 Ext. 1599.”

However, some people expressed anger at the police on the department’s Facebook page comment thread. “How can anyone be safe and happy when you let a Big racist Bully terrorize residents with no repercussion. This is an Injustice, he has Carte Blanche to do whatever he pleases,” a woman wrote.

Neighbors told CBS Philadelphia that there were other incidents in which Mathews allegedly harassed neighbors.