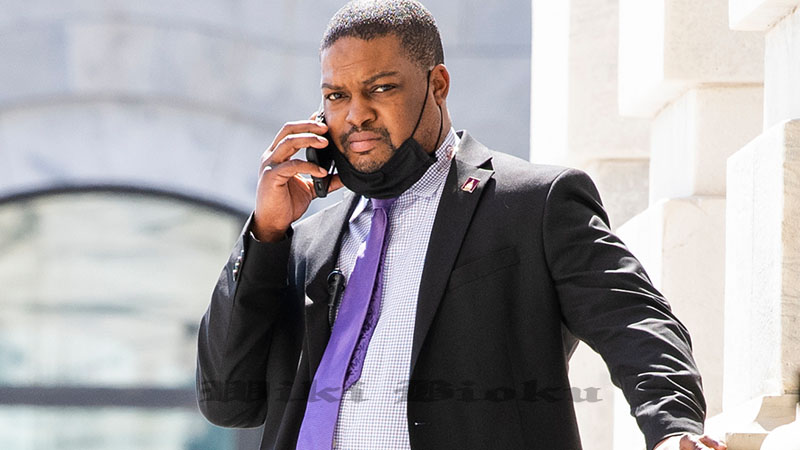 Eugene Goodman is a United States Capitol Police officer who is being hailed as a hero for luring a mob of protesters away from the Senate floor as they breached the U.S. Capitol building. A video shows Goodman, a U.S. Army veteran, facing a large group of protesters, and he appears to be standing against them alone.

Goodman has been a police officer with US Capitol Police since at least 2011, according to online records which list state disbursements for USCP. His LinkedIn profile says he works for Capitol Police and lives in the Washington-DC metro area. His public presence online is sparse, and he has not posted publicly on Facebook since December 2019.

US Capitol Police have faced criticism since the breach of the Capitol. Capitol Police Chief Steven Sund resigned following the siege, and many questioned why there were not enough re-enforcements to hold the line on the US Capitol. Some even questioned whether police intentionally let protesters in, which was disputed by witnesses who were on the scene.

Marcus DiPaolo shot a video of the breach on the Capitol, which circulated on Twitter claiming police let protesters through the barrier. DiPaolo said that was not the case. Cops were outnumbered 100 to 1, he said in an interview with New York Magazine’s Justin Miller.

“They definitely didn’t just open the barriers, the pro-Trump rioters made a fist like they were going to punch the cops, which is why I started recording, then they backed off the barricades. Completely outnumbered, there wouldn’t have been any point in fighting,” DiPaolo said.

He said police did not move the barrier, and that protesters pushed it aside.

Igor Bobic, a politics reporter at HuffPost, was the first to share the video during a series of live tweets as pro-Trump supporters breached the Capitol building January 6, 2021. Watch the video here or below.

Bobic shared Goodman’s efforts to lead protesters away from the Senate floor in a series of live tweets. The video shows Goodman confronting a large group of protesters at the door. In the footage, Bobic rushes down the steps while filming, and a mob can be heard shouting loudly. An officer’s asp baton is on the floor, and Goodman is standing alone in the doorway in front of the rioters.

Protesters have breached the Capitol. They’re outside the Senate chamber pic.twitter.com/I021tKliUD

“Here’s the scary moment when protesters initially got into the building from the first floor and made their way outside Senate chamber,” Bobic wrote on Twitter.

Goodman shoves a protester who was rapidly making his way to the front of the group and grabs an asp baton off the floor as they flood through the doorway. Goodman then leads the horde to the right, up the stairs and away from the Senate floor.

“Second floor,” Goodman calls on his radio as he leads the angry mob up the steps. At the top of the stairs, four other officers join Goodman to confront the group and tell them to leave. The protester who led the group inside shakes his head in defiance.

Wilson also elaborated on the action in the video.

Officer Eugene Goodman stopped a mob of white rioters from entering the chambers of the United States Senate.

At this perilous moment in our nation’s history, he was the one person standing between democracy and the rule of tyrants.

“This moment in ⁦@igorbobic⁩ stunning footage. In front of the officer, coming up the stairs, is a mass of rioters. The USCP officer glances to his left. Between those two chairs is the entrance to the senate floor. He lured them to his right, away from their targets,” she wrote.

Bobic also shared a photo where the lead protester appears to be considering going to the left.

Just now realizing how much of a close call it was in the Senate. Literally seconds. https://t.co/8JwiZvSngy pic.twitter.com/8P6aPo5aVh

“Looking again at the video I took of the mob storming the Senate, there’s a moment when the lead rioter looks right for a second, before continuing to follow the officer left, away from the immediate entrance to the Senate. This happened at 2:14,” Bobic wrote.

Susan Simpson, an attorney in Washington, DC, also described what she saw in the video.

“The officer initially scopes out the door, sees it’s not guarded, and tries to block the way. More rioters pour up the stairs after them, and the officer seems to go with a new strategy – he shoves the first rioter, pissing him off, and then leads the whole mob the other way,” she wrote.

Goodman served in the US Army, including a deployment overseas in Iraq, he wrote on his Facebook page. He spent some time in the army stationed at Fort Campbell in Kentucky.

Campbell is the home of the 101st Airborne Division, (Air Assault). The US Army Garrison is located near the state line between Tennessee and Kentucky.

Military.com describes the base as “a world class community.”

The base guide says:

Fort Campbell is a “World Class Community” and is home of the Screaming Eagles, of the 101st Airborne – the Army’s only Air Assault Division. Fort Campbell lies on the Kentucky – Tennessee border between the towns of Hopkinsville Kentucky and Clarksville Tennessee.

Clarksville, TN and Hopkinsville, KY are patriotic communities. American flags flying from many poles, and yellow ribbons serve as a reminders of those away defending our freedoms. As Fort Campbell Soldiers deploy and return from missions around the world, families, loved ones and the community greet them warmly.

Jaime Harrison of South Carolina, a former candidate for US Senate, said that political leaders who were on the Senate floor should honor Goodman for his actions.

“The word hero does not appropriately describe officer Eugene Goodman,” he wrote. “His judgment & heroism may have saved our Republic. I hope @SpeakerPelosi @SenSchumer @WhipClyburn consider him for the Congressional Medal of Honor. It is the least we can do.”

The word hero does not appropriately describe officer Eugene Goodman. His judgment & heroism may have saved our Republic. I hope @SpeakerPelosi @SenSchumer @WhipClyburn consider him for the Congressional Medal of Honor. It is the least we can do. https://t.co/22qvikwCqh

The Congressional Medal of Honor was chartered by Congress in 1958.

“The Medal of Honor is the United States’ highest award for military valor in action,” the Congressional Medal of Honor Society writes. “And while over 150 years have passed since its inception, the meaning behind the Medal has never tarnished. Etched within are the very values that each Recipient displayed in the moments that mattered—bravery, courage, sacrifice, integrity. A deep love of country and a desire to always do what is right. A distinguished award presented only to the deserving, the Medal tells a story of its own.”

Goodman has at least one child, a young daughter. He shares pictures of her on his social media profile, including one where she is wearing his police uniform shirt, smiling broadly as she stretches out her arms and proudly displays the nametag, patches and badge.

“His name is #EugeneGoodman,” he wrote. “With domestic terrorists storming towards him, he looked to his left – saw the Senate chamber – and led them to his right up the steps to protect the people. A Black person who protected his country even when it hasn’t protected him. Honor this man!”