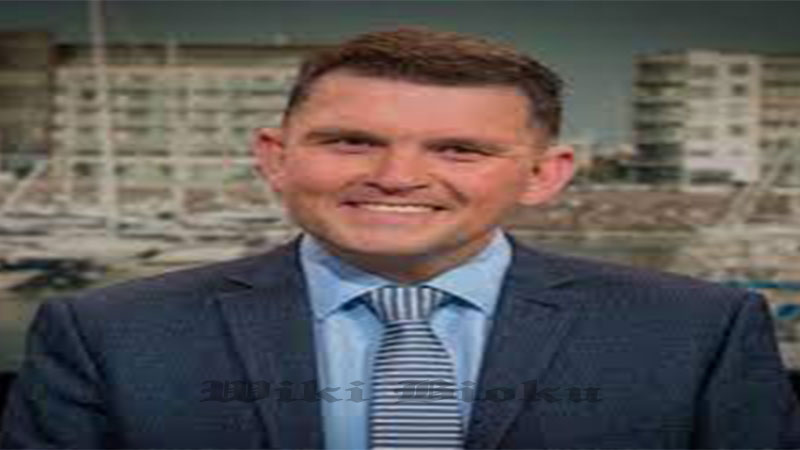 Gary Burgess was the ITV News reporter who died of cancer on New Year’s Day in hospice, it has been confirmed.

Born in Manchester, Burgess moved to South Africa at the age of six. Burgess’s introduction to broadcasting began at his high school radio station MHR, giving him a desire for a career in media. Burgess began his broadcasting career in 1992 by brewing cups of tea on Radio Wave 96.5 in his hometown of Blackpool. He also worked at Warrington’s Wire FM, Q96 in Renfrewshire, and as a group program controller for UTV radio stations in the north of England.

His first season in the Channel Islands was in Guernsey, working on Island FM in the early 2000s. He would return a few years later to host the Sunday phone entry on BBC Radio Guernsey.

Burgess moved to ITV Channel TV’s Guernsey office in 2011 and later moved to Jersey. He was a finalist in the 2021 Royal Television Society Southern Awards.

He returned to commercial radio in 2018, joining the host line-up on Channel 103. He also wrote regular columns for the Jersey Evening Post.

Gary Burgess has died at the age of 46-years-old.

Gary married his partner Alan in 2018, becoming the first same-sex couple in Jersey to convert from a domestic partnership to marriage after the island legalized same-sex marriage. They had held an unofficial wedding ceremony in March before the law took effect.

ITV News journalist Gary Burgess died of cancer at age 46 on New Year’s Day in hospice, it was confirmed.

He died peacefully in his sleep in a hospice in Jersey on January 1 after doctors found tumors in his lungs and told him they were inoperable.

Burgess told fans he had six to twelve months to live in November 2020 and documented his journey with cancer on his blog after receiving the terminal diagnosis.

In a final message released by ITV following the news of his death, Burgess praised his ‘soul mate’ Alan and said he felt ‘great sadness’ at the prospect of leaving his friends and family behind.

He said, ‘I’ve had the best life. I have had the luckiest life. I met my soul mate and the love of my life who became my husband. I worked with some of the most amazing people in newsrooms and studios doing the work that I love.

And I have been able to share my own relatively short time on this planet surrounded by friends and loved ones who have enriched my life in ways that they may never truly understand.

‘My biggest sadness is the prospect of leaving all that and everyone behind. The idea of ​​doing that to Alan is unfathomable to process, but I also know that the same people who have shown me love and support now will wrap those feelings around them for days to come.

It’s time for me to hand over my microphone and keyboard for others to talk about me, so let my last words be simply ‘thank you. Each person in my life, in their own way, has helped me live my best life. That’ll do.’

Burgess’s husband, Alan, took to social media to praise the star and thank fans for the ‘overwhelming’ support they both received in a heartbreaking tribute to the journalist.

He wrote: ‘It is with great sadness that I need to announce the death of my wonderful husband Gary on Saturday, January 1st. After many years of battling cancer, Gary died peacefully in his sleep at Jersey Hospice.

‘I would like to publicly thank all the people and services within Jersey, and also at Southampton General Hospital, who have cared for Gary so well over the past 7 years through all the different stages of this illness.

‘I have a special thanks to Jersey Hospice and the Jersey Hospital Clinical Investigations team, who together allowed Gary to stay safely and comfortably at home for as long as possible in accordance with his wishes. He was even able to continue making occasional trips to his favorite breakfast spots on the island with his oxygen tank in hand.

And I also have to thank the many supporters, whether they are friends, family, colleagues, former colleagues, viewers, listeners, bloggers, or complete strangers, who have sent us their love and kind words from Gary. he received the terminal diagnosis from him in November 2020. We have both found the volume of messages almost overwhelming at times, but we were always grateful for the positivity, warmth, and support they gave us both.

“I look forward to many tributes to Gary in the hours and days to come and I want my words about him to be as straightforward as possible. Throughout his career in journalism and broadcasting, Gary would have seen every variation of words that describe someone’s strength and bravery, their wit and humor, their kindness and generosity, their stubbornness and determination, their sense of mischief, and his joy at the simple pleasures of life.

So, in an attempt to avoid the cliché, I’m just going to misquote one line of dialogue from the final episode of The West Wing, being one of Gary’s favorite shows and something said with love and pride by one spouse to the other. You did a lot of good, Gary. Very good.

Tributes have been poured out for the reporter, who has been described by friends and colleagues as a “brilliant journalist”, “friend” and “wonderful colleague”.

“It was an honor meeting Gary and calling him a friend. Among the many attributes of him, some, kindness, tolerance, and optimism, many of us aspire to show more often, but he carried it with ease. ‘

ITV’s regional news chief Guy Phillips wrote on Twitter: “Gary was a brilliant journalist and a wonderful colleague who cared deeply about his work and everyone around him. He had many special qualities: enthusiasm, determination, and courage. A very sad loss. My thoughts are with Alan, his family, and his many friends and colleagues. ‘

Karen Rankine, News Director for ITV Channel TV, wrote: “We are all devastated by the loss of our dear friend and colleague Gary. Our thoughts and prayers go out to Gary’s husband, Alan, and his family. ‘

In 2015, new tumors were found in his lungs before they were surgically removed, and more tumors were removed in the same way a year later.

The late star revealed that a CT scan in October 2019 had found five more tumors that were treated with chemotherapy.

But on November 3, her oncologist told him that her cancer was terminal.

She wrote on Twitter last year: ‘Hello friends. This is a difficult post. I have always tried to be an open book about my health. Today, some news that I never expected to share. ”

Following up on her popular blog, she wrote: ‘Hearing that you are going to die is strange.

‘The nasty things growing between my heart and lung that had been reduced during three months of’ salvage chemotherapy ‘earlier this year have come back to life … They are inoperable. There is no treatment left to get rid of them.

“ Apparently, I’m unusual (I knew it!), And my oncologist only sees one case of this rare cancer every year.

“There is a chemotherapy treatment that has the potential to add a few extra weeks, maybe months, to my life, but the trade-off is the loss of quality of life due to the side effects of that chemotherapy. Right now, I have yet to decide whether or not to do it. ‘

He said: ‘It immediately washed over me like the most overwhelming sea of ​​guilt to think that my husband will probably be home alone without me. Our holidays. Our TV watching on the couch. Our weekend breakfasts.

‘He just feels totally unfair. For him. For me. And I know that makes me look selfish. I don’t mean it like that.

“ The strangest thing is that, deep down, I have felt like I am dying for about three months. I kept hoping I was wrong.

“The doctors didn’t know because they only did the scan and other tests last week, but they knew I was dying.

I just didn’t have the words to describe it and I was determined to keep my best-playing face, as each day had gotten a little more difficult than the day before.

It is a tiny thing. I’m just a little slower. I’m just tired of the shadow. My skin is a bit drier. My pain is only a little more painful. And so it goes. Incremental, but over time it accumulates. I do not feel well

But I smile with my smile. I do my job. And when wonderfully nice people say nice things, especially “you look so good”, I cry a little on the inside, and on the outside, I smile, thank them and say “I’m moving on.” It is my way of trying not to lie to them without burdening them with my afflictions.

‘Do I transfer my savings to my husband’s bank account? What about the flight loyalty points I have? Do I have to call the tax office and let them know that I am dying?

‘Should I plan my funeral now? Do I want to be buried or cremated? How will dying feel? How can I cease to exist?

I “Googled” what happens when they tell you you’re dying of cancer “and now I know the results are silly.

Now my heart breaks at the prospect of the person I love more than anyone else in this world is adrift. It’s not fair to him. I feel like the worst husband ever, even though I know that’s just selfish, self-pitying silly talk. ”