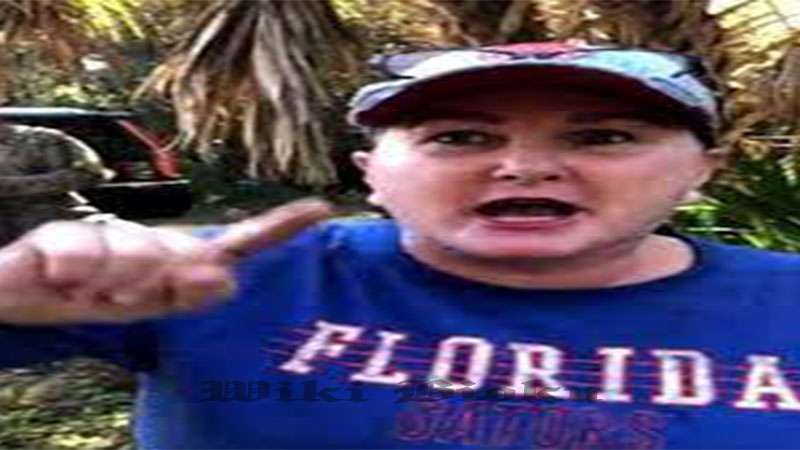 Gina Brashear is the Florida woman who was recorded calling two Black men the n-word multiple times and later defended her right to say it. Brashear told NBC affiliate WBBH-TV she “absolutely” has “reasons to be racist” and had no remorse about using the expletive.

A Lee County deputy responded to the scene on a harassment call, Heavy confirmed with the Lee County Sheriff’s public information office. But no charges were filed.

Brashear used to own a veterinary clinic in Fort Myers. A search of business records on Florida’s Secretary of State website brings up two companies under Brashear’s name: Taylor’s Tears Animal Rescue, which was dissolved in 2010, and Affordable Animal Care Clinic, which shut down in late 2020. The second organization was misspelled in the official filing as “Clinc.”

When the Affordable Animal Care Clinic ceased operations, another organization called the Homestead Veterinary Medical Center began caring for its patients and acquired the facility’s phone number. Homestead said in a Facebook post that the medical center has received multiple phone calls about Brashear’s racist rant and explained that Homestead is not affiliated with Brashear in any way. The organization used the moment to condemn Brashear’s actions:

Following the racist rant expressed by an individual named Gina Brashear that was widely shared on social media and local news outlets we at Homestead Veterinary Medical Center have NO ASSOCIATION IN ANY WAY SHAPE OR FORM with this racist woman. We DO NOT condone the behavior of this woman, nor do we share her beliefs or worldviews expressed; but rather vehemently condemn them!

Please, note that we acquired the phone number of the ex-Affordable Animal Care Clinic in order to serve the clients of that facility who were left without previous announcement of the facility going out of business or being provided with their pets medical records. So within this pandemic crisis we felt that it was our duty to help these people and their pets. If you or someone you know is calling 239-694-7271 you will be answered by our staff here at Homestead Veterinary Medical Center and we will be glad to assist you and your pet in any way that is needed. If you are calling 239-694-7271 to express your disappointment, your aggravations, or your frustrations, please keep in mind that we are not associated with her and this will tie up our lines for people who are legitimately trying to seek assistance for their pets. Thank you for your understanding.
Unfortunately, hate and anger is a huge part of todays society and we can only continue to pray that people will see the need for change and find a way for unity.

Brashear has not yet commented on the incident on her public-facing Facebook page. Her account includes multiple images of the Confederate flag and statements indicating support for the January 6 Capitol riot.

The recorded confrontation took place on January 23 in Lehigh Acres, Florida. The community is located in Lee County east of Fort Myers.

According to WBBH-TV, moving company owners Will Osley and Melvin Finley were unloading sheet metal from a truck when Brashear began shouting. “We start hearing this commotion on the other side of the truck jut getting louder and louder and more intense,” Finley told the TV station. The customer who was receiving the product started recording.

In the video shared by WBBH-TV, Brashear looks at the person recording and exclaims, “And if you think I’m gonna have a f****** n***** tell me he’s not moving off my driveway?” The person recording tells Brashear she cannot use that type of language. Brashear responds that she can “use the word n*****” as much as she wants and tacks on extra expletives that were bleeped out. Brashear uses the racial slur at least six times in 30 seconds and adds, “When they pass a law that I can’t say n*****, please bring it to me in writing.”

Reporter Gage Goulding spoke with Brashear about the incident over the phone. She told him there was “nothing illegal” about saying n***** and that she doesn’t care what critics think of her. “The one thing you need to get straight coming from me, I don’t care who’s upset. I don’t care that I’m called a racist.”

Brashear Made Headlines in 2010

Brashear expressed amusement when she made headlines in 2010 over an incident at the Affordable Animal Care Clinic. As the Veterinary Information Network detailed at the time, Brashear was bitten at least three times not by a dog, but by the animal’s human owner.

A client named Kathleen Minneker was about an hour late when she dropped off her two dogs at the clinic for a grooming appointment, VIN News reported. The groomer agreed to stay late but Brashear still locked the front doors at the regular closing time. When Minneker returned to retrieve her dogs, she became angry to find the front doors locked.

Brashear told VIN News that when the groomer opened the door, Minneker shoved him. Brashear said when she stepped in to defend her employee, Minneker knocked her down. Brashear said the woman bit her face, finger and big toe before the police arrived. The Naples Daily News published Minneker’s mugshot and reported the woman was arrested for battery.

Brashear compared the incident to something that would be featured on The Jerry Springer Show. She told VIN News at the time, “We all just need to laugh about it” and said she wouldn’t hold a grudge against Minneker.

Arrested for Aggravated Stalking in 2013

No charges were filed in connection to the January 23 confrontation but Brashear has faced criminal charges in Lee County before. Court records show Brashear was arrested on September 17, 2013, and charged with aggravated stalking, which is a third-degree felony.

Brashear was released on a $10,000 bond and was ordered to stay away from the victim. The court record shows the charge was dropped about a month after the arrest and the “no contact” order was canceled.

The other citation that comes up in a search of Lee County records dates to 2009. Brashear was cited for violating a county ordinance against allowing animals to run freely off-leash. The court record shows Brashear did not contest the charge and paid a fine.

Brashear has expressed support for those who stormed the U.S. Capitol on January 6. She referred to them as “patriots” on her Facebook page and called on President Trump to defend them.

In the days after the riot, Brashear called Trump a coward for denouncing the attack. She wrote on January 7, “Trump you’re a f****** coward!!! You pathetic piece of s***!!! Those Patriots marched for YOU AND TOOK A STAND AGAINST CORRUPTION!!! You are repulsive!!!! Where’s the gratitude for their Loyalty?!? You’re a disgrace!!!!”

On January 11, Brashear posted that she hoped Trump was planning to declare martial law to keep control of the government. “Trump you better be in your rabbit hole preparing insurrection & martial law to take this Country back! You’ve ran your mouth for 4 years! YOU have the authority to order this done! If you’re not I hope you get sent to prison, because that’s where all your protesters are headed right now that took a stand for you! We’re fixing to see what you’re really made of. Man up & do YOUR JOB!!!!! BECAUSE WE THE PEOPLE ARE PISSED AT WHAT YOU’RE ALLOWING TO HAPPEN!!! GROW A SET!!!!!”

Two days later, Brashear accused Trump of “abandoning” the people who had marched on the Capitol in his name. She wrote in part, “I hope you are arrested charged and sentenced to GITMO for the rest of your miserable pathetic life!!!!! Those Patriots that marched to the Capitol for you have lost everything!!!! You despicable repulsive TRAITOR!!!! Hell is too good for you!!!!”