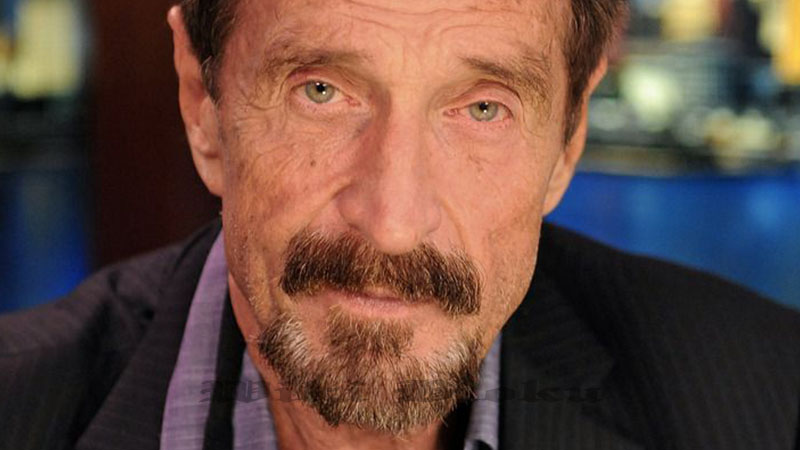 Janice McAfee is the wife of John McAfee, who was found dead in his prison cell in Spain while awaiting extradition to the United States. He leaves behind his wife, Janice McAfee. They have been married since 2013.

Janice McAfee is about 37 years younger than John McAfee, and he has died at the age of 75-years old.

Janice and John McAfee were married in 2013 after meeting in 2012, Daily Mail reported. They met when he hired her as a prostitute and paid her for a day and a night together, ABC News reported. Janice told ABC News that he saved her from trafficking and allowed her to reconnect with her son.

.@officialmcafee & I met 8yrs ago today. It feels like we’ve lived a dozen lifetimes since then. I don’t recognize the girl I was when first we met but I love the woman I’m becoming. John’s imprisonment is the longest we’ve been apart but I’ll continue to fight for his freedom.❤ pic.twitter.com/TcQsYsaygn

Janice said in a 20/20 interview: “It was, I don’t know how to say it, magical – ’cause he saw the hurt that was there,’” Daily Mail reported. She said he “thought I was worthy enough of a second chance.”

In a tweet shared on December 14, 2020, she wrote: “https://wikibiouk.com/janice-mcafee-biography/[email protected] & I met 8yrs ago today. It feels like we’ve lived a dozen lifetimes since then. I don’t recognize the girl I was when first we met but I love the woman I’m becoming. John’s imprisonment is the longest we’ve been apart but I’ll continue to fight for his freedom.❤”

My beautiful wife – @theemrsmcafee and myself relaxing in our retreat pic.twitter.com/wiQ4Zo3GVt

ABC News described John McAfee as being “disarmingly sweet” toward Janice. The report described her as clapping her hand over his mouth sometimes during the interview to stop him from talking about his neighbor who was murdered or to prevent him from going off on tangents not connected to the interview.

My statement on John’s detainment. pic.twitter.com/VU0WpUGp6R

In October, she released the following statement about his arrest:

In an interview with The Sun, Janice said that she had to pass on information about John to a “criminal underworld” during the first years of their marriage. She said she was asked to provide information on where he was and to hide poison in his food.

She said she was too scared to disobey them at first and didn’t tell McAfee what was going on at first.

“Because I didn’t tell [him] it had a strain on our relationship,” she said.

John McAfee, meanwhile, told The Sun that he figured out what was happening on his own and understood that “she was in a hard place.” He said it was a “beautiful moment” when she was honest with him.

After living in a compound in Tennessee, they ultimately left to live on a yacht to avoid arrest and extradition, John McAfee told The Sun.

During the interview, John McAfee said about the children: “We’re taking good care of them and they’re being watched by my people.”

Jail would be more fun. pic.twitter.com/f1orfZwjPV

McAfee, meanwhile, said that he had 47 kids between the ages of 16 and 47, The Sun reported.

I’m not here to give you solutions;
For anything.

That’s for you young folks of mine to do:

Yes. I have great-grand children.

I’m here to point to the reality around you.

Which you children are so fond of ignoring.

However, he later tweeted that the number 47 was an approximate guess and not an exact count due to DNA testing not being around when he was growing up.

He told The Sun: “It’s very difficult to keep track of. Almost all of them were illegitimate … I keep in touch with everyone… I take care of all of them financially.”

However, he told Twitter that his guess of 47 children was “the best guess given the information that I have.”

Yet cares enough to keep count…

Happy Father’s Day @officialmcafee. Though you are spending the day in prison know that you are loved and appreciated. #FreeJohnMcAfee #FreeMcAfee pic.twitter.com/YFmB36KWfb

On June 20, she tweeted a Happy Father’s Day message to John McAfee while he was in jail. She told him that he was loved and appreciated. In her message, she shared that he may be polarizing but is always honest.

She tweeted, in part: “Now the US authorities are determined to have John die in prison to make an example of him speaking out against the corruption within their government agencies. The media continues to vilify him, per their narrative, and there is no hope of him ever having a fair trial in America because there is no longer any justice in America…”