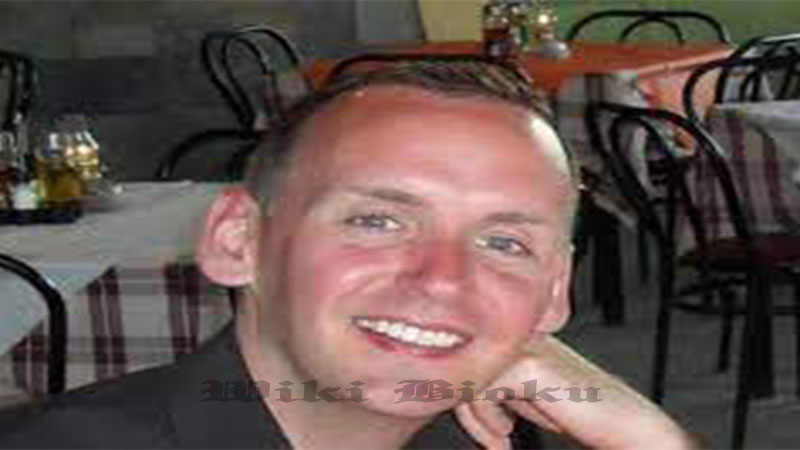 The second victim of the Reading terror attack was today named as a ‘brilliant and loving’ American pharmaceutical worker who had been living in Britain for 15 years.

Joe Ritchie-Bennett, from Philadelphia in the US, had been working for a Dutch firm in the Berkshire town for about a decade having previously been employed by a London law firm when he first moved to England.

A minute’s silence will be held in Reading at 10 am today, while students of Mr. Furlong, head of the history at the Holt Community School in Wokingham, will flock to a church to remember him by lighting candles and laying flowers.

Meanwhile, a security guard has revealed how he saw the suspect get rugby tackled by a police officer in the park, adding that his hands were so covered in blood it looked like he had put them in ‘a bucket of red paint’.

In other developments in the shocking terror attack which left Prime Minister Boris Johnson feeling ‘sickened’.

Three people were killed and another three were injured in a frenzied knife attack in Forbury Gardens on Saturday evening, with suspect Mr. Saadallah, 25, who was previously known to MI5, arrested for the rampage.

He was detained under the Terrorism Act, though police are thought to be looking at mental health reasons for the attack.

Around 6.45 pm: Witnesses say a lone attacker with a knife targeted a group of people in Forbury Gardens near the Reading town center.
6.56 pm: First emergency call is made to Thames Valley Police. Chief Constable John Campbell said officers arrested a man within five minutes of the call.
Just before 10 pm: Police ask members of the public not to share the graphic images or videos of the incident that are circulating on social media during the evening.
10.38 pm: A security source tells the PA news agency that the incident is suspected to be terror-related and that the man arrested is Libyan.
10.56 pm: Thames Valley Police says there is ‘no indication’ the incident is linked to the Black Lives Matter protest that took place earlier in the day.
After 11 pm: Several armed police officers are seen going into a block of flats off Basingstoke Road in Reading.
Sunday
Around 1.30 am: Thames Valley Police confirms three people have died and another three are seriously injured. The force confirms a 25-year-old man is under arrest on suspicion of murder.
8.30 am The incident is declared as terrorism, the head of counter-terrorism policing, Metropolitan Police Assistant Commissioner Neil Basu says, this is not made public until after 11 am when Counter Terrorism Policing South East (CTPSE) says it has taken over the incident.
9 am: Prime Minister Boris Johnson holds meetings with security officials, police, and senior ministers in Downing Street.
11.45 am: Security source tells PA the suspect is a Libyan asylum seeker and mental health is being considered a major factor.
Just after 12 pm: Mr. Basu says there is nothing to suggest anyone else was involved in the attack and confirms it was not associated in any way with the Black Lives Matter protest in Reading earlier on Saturday.
After 1 pm: Suspect is understood by PA to be named Khairi Saadallah.
Prime Minister Boris Johnson says he is ‘appalled and sickened’ and pledges ‘we will not hesitate to take action’ if there are lessons to be learned.
4: 55pm: One of the victims in the Reading terror attack is named by The Holt School in Wokingham as James Furlong, it’s head of history and government and politics.
Just before 6 pm: Security sources reveal Saadallah briefly came to the attention of the security services in 2019, but the information provided did not meet the threshold for investigation.
6 pm: It is understood MI5 had received intelligence the suspect planned to travel abroad, possibly for terrorism purposes, but the threat was found to be insubstantial and no case file was opened.
7.06 pm: The suspect is re-arrested under Section 41 of the Terrorism Act 2000, Counter Terrorism Policing South East announce.

He comes from a family of police, with his brother Richard had been in the Philadelphia force for 24 years; his father – also Richard – a retired chief inspector; and his mother Charlene and sister-in-law both retired officers.

His grandfather was in the Navy and fought in the Second World War and Korean War before being killed aged 38 in 1958 just several days before he was due to be honorably discharged.

Mr. Ritchie-Bennett had been sitting in Forbury Gardens in Reading with his friends, including fellow victim James Furlong, a 36-year-old history teacher, when they were attacked on Saturday evening.

Mr. Ritchie-Bennett’s father Robert told the Philadelphia Inquirer: ‘I absolutely love my son with all of my heart and all of my soul. We’re mourning, and we’re trying to decide what we’re going to do. It’s 3,500 miles away.

‘They are still in lockdown over there with the coronavirus, and I don’t know what else to say.’ He also told CBS News: ‘The family is heartbroken they have lost their brilliant and loving son. This was senseless.’

His brother Robert added: ‘I love him. I always have. I always will. He was a great guy. He was four years younger than me. Our family is heartbroken and beside ourselves. He did not deserve to go out like this.’

Mr. Ritchie-Bennett also suffered his own tragedy after his husband Ian Bennett, whom he married in England in November 2006, died in December 2014 aged 32 after a short battle with colon cancer.

Two other people injured in the attack remain in hospital, while one has now been discharged. Police including counter-terrorism detectives continues to question Libyan suspect Khairi Saadallah who is the alleged murderer.

A second victim of the Reading stabbing attack has been named locally as Joe Ritchie-Bennett.

According to tributes posted on social media, Mr. Ritchie-Bennett was friends with James Furlong, the only other victim to have been named so far.

Mr. Ritchie-Bennett’s Facebook page listed him as originally from Philadelphia in Pennsylvania, but he had been living in Reading.

The Philadelphia Inquirer newspaper reported that he was 39 and had moved to England from the US around 15 years ago.

His brother Robert Ritchie told the newspaper the family had been left “heartbroken and beside ourselves” after hearing of his death.