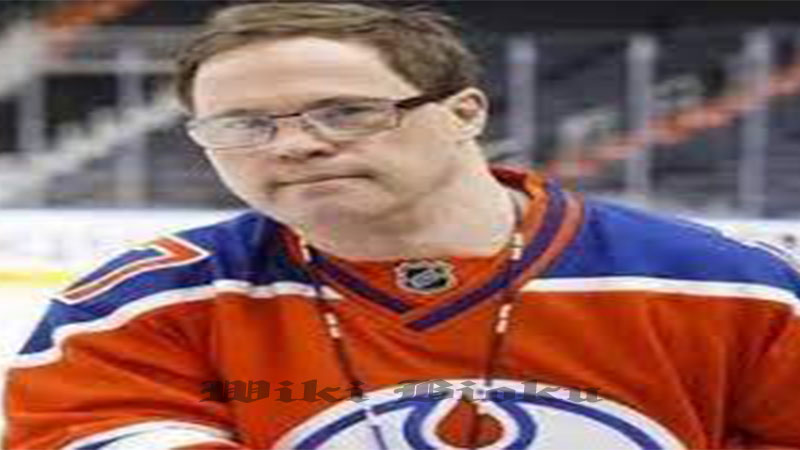 Josey Moss, who was born with Down syndrome, worked in the locker room of both the NHL’s Oilers and CFL’s Edmonton Football Team since the mid-1980s. He was inducted into the Alberta Sports Hall of Fame in 2015.

Josey Moss was the locker room attendant for the Edmonton Oilers of the National Hockey League and the Edmonton Eskimos of the Canadian Football League. Born with Down syndrome, Moss caught the eye of Oilers centre Wayne Gretzky in 1985, when Gretzky was dating Moss’ sister, Vikki. Impressed with the dedication Moss brought to a job at an Edmonton bottle depot, Gretzky suggested to team general manager Glen Sather that the young man be given a tryout.

As the summer of 1986 came around, Gretzky was worried that Joey would lose everything he had learned with the Oilers, so Gretzky called up the equipment manager of the Edmonton Eskimos, Dwayne Mandrusiak, and asked him if Joey could work with them during training camp. Gretzky even offered to pay Joey’s wages for the team.

Joey Moss has died at the age of 57-years-old.

Moss’ career with the Oilers long outlasted Gretzky’s, and his determination and passion for hockey have made him a nationwide celebrity and a major symbol of continuity within the franchise. (In 2006, during a surprising Oiler playoff run, he delayed elective surgery for a hernia in order to see the Stanley Cup playoffs through to the finish.) His main duties with the team included cleaning, handling towels and water, and running errands for former equipment manager Lyle “Sparky” Kulchisky.

In 2003, Moss received the NHL Alumni Association’s “Seventh Man Award” in recognition of outstanding behind-the-scenes service to the league. The Joey Moss Cup, a trophy contended for by Oilers players in an annual split-squad game near the end of training camp, is named after him.

Moss’ dedication to the Edmonton Eskimos and the Oilers was recognized when a mural was unveiled on October 20, 2008 on 99th Street in Edmonton. He was recognized again on November 14, 2012 with the Queen Elizabeth II Diamond Jubilee Medal. (Video of the Ceremony) On May 29, 2015, Moss was inducted into the Alberta Sports Hall of Fame.

The #Oilers organization is extremely saddened by the passing of our dear friend & colleague, the legendary Joey Moss.

Once an Oiler, always an Oiler.

Edmonton lost a sports legend on Monday: Joey Moss, a fixture in the city’s professional hockey and football landscape, died. He was 57. Wayne Gretzky, who introduced Moss to the Oilers in the 1984-85 season, confirmed Moss’ death on Facebook.

Moss, whose stint with the Oilers long outlasted Gretzky’s, became a mainstay among Oilers faithful not only for his hard work, but also for his spirited rendition of “O Canada.” In 2003, he received the NHL Alumni Association’s “Seventh Man Award,” awarded in recognition of outstanding behind-the-scenes service to the league.

Moss also had a mural dedicated to him by the Edmonton Football team — then the Eskimos — in 2008.

His death created an outpouring of effusive remembrance on social media.