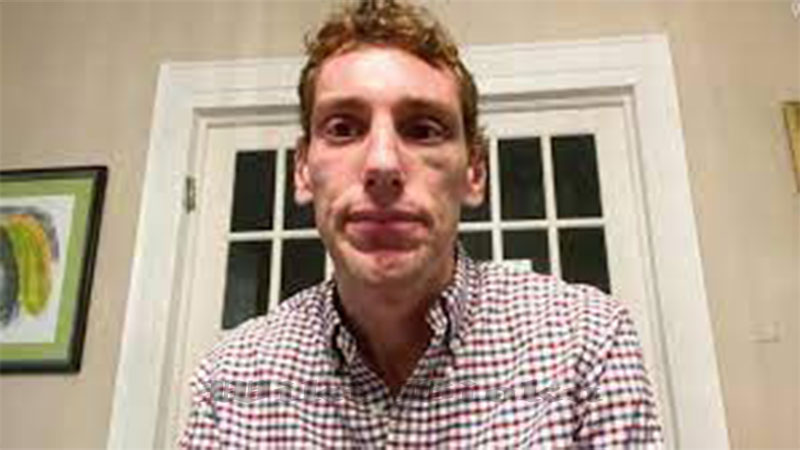 Joseph Borgen is a Jewish NYC man, brutally beaten by a pro-Palestinian mob who shouted ‘go back to Israel’ an Upper East Side accountant, was wearing a grey kippa and walking toward Times Square around 6:30 pm on May 20 when he was pursued by a young man wearing a black bandana. A pro-Palestinian mob reportedly maced, kicked, and pummelled a Kippa-wearing Jewish man on his way to a pro-Israel rally on Thursday, May 20, according to the NYPD.

A pro-Palestinian mob reportedly maced, kicked, and pummelled a Kippa-wearing Jewish man on his way to a pro-Israel rally on Thursday, May 20, according to the NYPD. The victim, Joseph Borgen, was treated for minor injuries at a local hospital and released. The incident is now being investigated as a hate crime, according to the New York City Police Department.

Media: Joseph Borgen, attacked wearing kippa in #Manhattan at 47th and 7th Ave., released from Bellevue today, tells @donlemon on @DonLemonTonight: “I was texting my friends, ‘I’ll be there in a minute.’ Then out of the corner of my eye I saw someone chasing me from behind.” pic.twitter.com/I2bDN51wng

The photos issued by the NYPD show that one of the men, wearing a black and red striped shirt, is the same suspect linked to another assault in New York City on Thursday, May 20. The suspect allegedly tossed an explosive device from the back of a pickup truck that exploded and burned a 55-year-old woman near 37 West 47 Street about 6 pm on Thursday, just minutes before the assault on the Jewish man, according to cops.

There was a rally at this location last week, which I had gone to,” Borgen told the New York Post. “I wore a yarmulke last week, and nothing big happened. I showed up for the same rally this week. I got off the subway at 6:30 and started walking to the rally, and before I could even make it to the rally, a few blocks away, a guy started chasing me.”

“I turned around to try to figure out what was going on and the next thing I knew I was surrounded by a whole crowd of people who proceeded to physically attack me, beat me, kick me, punch me, hit me with crutches, hit me with flag poles,” he told the Daily Mail on May 21 from his apartment after being released from Bellevue Hospital.”I don’t even want to look in the mirror,” he added. “While kicking, punching, and hitting him with flagpoles, he says they told him they were going to “kill him and Israel,” said NBC reported Pei-Sze Cheng on Twitter.

29 year old Joseph Borgen was on his way to a pro-Israel rally in Times Square when he was attacked by an angry mob of Pro-Palestine protestors. While kicking, punching and hitting him with flagpoles, he says they told him they were going to “kill him and Israel.” #nbc4ny pic.twitter.com/rOud0s7tdb

Borgen is a resident of Nassau County on Long Island, according to Nassau County Executive Laura Curran, who told ABC that she was “appalled” by the attack. “I have asked the Nassau County Police to continue to communicate with synagogues and yeshivas, as well as other houses of worship, to ensure all of our residents are protected,” Curran said in a statement on Friday, May 21.

Waseem Awawdeh, 23, of Brooklyn, was arrested on May 20 and named as the suspect. He was charged with assault as a hate crime, gang assault, menacing, aggravated harassment as a hate crime, and criminal possession of a weapon, police said. The other suspects remain at large. The Anti-Defamation League registered nearly 200 attacks on American Jews in the seven days following Hamas’ first rocket attack on Israel on May 10.

Thought I was Going to Die

Borden sustained bruises on his face and body, and his head was throbbing from a possible concussion. Video of the assault showed Borgen was left defenseless on the ground as he was battered by the angry mob outside of 1604 Broadway. “After I wound up on the ground, I was literally just in a fetal position, trying to guard my head and face, literally just trying to make it out of their alive,” Borgen said. “I thought I was going to die. I thought I was really going to die.”

Borgen said that eight to ten people were involved in the beating and that they were screaming anti-Semitic slurs like “You filthy Jew. We’re going to f*****g kill you. Go back to Israel. Hamas is going to kill you”. He said the most stressful part was when they pepper-sprayed him at the end. “I thought I was getting urinated on because I felt a stream on my face. They maced me or pepper-sprayed me for like a minute straight,” he said.

The Whole Face was on Fire

“My whole face was on fire. I couldn’t see. In the hospital, they literally had to drain out my eyes. My skin’s still on fire in certain places,” he added. Detailing his injuries he shared: “I have a concussion. I had an X-ray on my wrist. It’s not broken but it’s messed up. Every time I move it it’s in pain, probably sprained. I have bruises all over my body. I have a black eye. My face is banged up. I’m just sore all over my body. They were kicking me in my ribs, my stomach.”

He claims a mob attacked him simply because he was wearing a kippa. “They feel like they can get away with more because they have politicians backing them up,” Borgen said. “Some of the things I see in the news and on social media, it’s just sickening to me. I would never think I’d ever had to worry about my religion or my skin color or my ethnicity is a problem in New York City,” he continued. Borgen was on his way to midtown, where friends were gathering for a rally to support Israel in its dispute with Hamas, he said he expected a peaceful demonstration.”I was going there to show my support, show my pride in Israel, let them know we have their back even though we’re 6,000 miles away,” Borgen said.

“Beyond just the Jewish perspective, the amount of hate that’s going on these days is really just mind-blowing to me. I have a coworker who is of Asian descent who is afraid to ride the subway at night. It’s just sickening,” he said.

Waseem Awawdeh, 23, of Brooklyn, was arrested on May 20 and named as the suspect. He was charged with assault as a hate crime, gang assault, menacing, aggravated harassment as a hate crime, and criminal possession of a weapon, police said. The other suspects remain at large. The Anti-Defamation League registered nearly 200 attacks on American Jews in the seven days following Hamas’ first rocket attack on Israel on May 10.

⚠️Thursday May 20th, approx. 6:44 PM, at 1604 Broadway, a male, 29, wearing a yarmulke, was assaulted by a group of males who, knocked him down, punched, kicked and pepper sprayed him and hit him with crutches, while making anti-Semitic statements. Know them? ☎️1-800-577-TIPS pic.twitter.com/NDgmJ79MHt