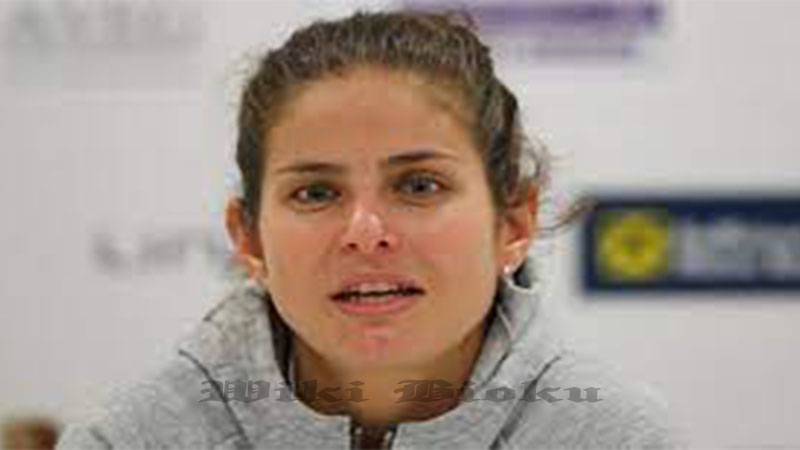 Julia Goerges is a German former professional tennis player. A former top 10 singles player, she was ranked as high as No. 9 in the world on 20 August 2018, and was ranked inside the top 15 in doubles, peaking at world No. 12 on 22 August 2016. She won seven singles and five doubles titles on the WTA Tour (her biggest title coming at the year-end 2017 WTA Elite Trophy), as well as six singles and six doubles titles on the ITF Women’s Circuit.

She attended the Klaus-Groth-Schule and Theodor-Mommsen-Schule in Bad Oldesloe from 1995 to 2005, and completed the Mittlere Reife (middle-school diploma).

She began playing tennis around the age of five. Her tennis idol growing up was Martina Hingis, and she is also a fan of Roger Federer. She was coached by Sascha Nensel, former coach of fellow German player Nicolas Kiefer, until 2015. She prefered hard and grass courts, and her favorite tournament was the Australian Open.

Goerges turned professional in 2005, and first broke into the world’s top 100 in June 2008. Prior to 2018, her best result in a Grand Slam singles tournament was reaching the fourth round five times. She broke into the top ten for the first time in February 2018, before going on to reach the semifinals at the 2018 Wimbledon Championships. She was also a two-time semifinalist in women’s doubles at the Australian Open, and reached the finals in mixed doubles with Nenad Zimonjić at the 2014 French Open.

She announced her retirement from professional tennis on 21 October 2020, two weeks before her 32nd birthday.

Julia Goerges was born in Bad Oldesloe to Klaus and Inge Goerges, both of whom work in insurance. She has one elder maternal half-sister named Maike, who also works in insurance.

In 2005, she began her career on the ITF Women’s Circuit, playing in seven tournaments and losing in the first round in five of them. In 2006 and 2007 she continued to play mostly ITF tournaments. In 2006, she won the Wahlstedt and Bielefeld tournaments. In 2007, she won tournaments in Antalya and Bucharest and made her first WTA Tour main draw appearances, the highlight of which was a semifinal in Stockholm, where she lost to Vera Dushevina in three sets. Görges made her Grand Slam main draw debut at the US Open, losing to Justine Henin in the first round in straight sets. In 2008 Görges continued to play in a mix of ITF and WTA events. Her best performances were reaching the semifinals of the Banka Koper Slovenia Open, where she lost to Anabel Medina Garrigues, and a quarterfinal-loss to Olga Govortsova in the Cellular South Cup.

She made her top-100 debut in the rankings after the French Open. She won her first Grand Slam main-draw match at Wimbledon, where she upset the 23rd seed Katarina Srebotnik in a three-hour, 41-minute first-round match. However, she bowed out in the second round to Marina Erakovic in straight sets.

Görges defeated Greetje Minnen and Jil Teichmann to reach the quarterfinals in her Auckland Open title defence, but she lost to Caroline Wozniacki in the quarterfinals in straight sets. Following this loss, she fell to No. 38. She partnered Caroline Garcia in doubles, and reached the quarterfinals, where they fell to eventual champions Asia Muhammad and Taylor Townsend. At Adelaide, she defeated Priscilla Hon before falling to Belinda Bencic in two tight sets. At Melbourne, she defeated Viktória Kužmová and 13th seed Petra Martić, before being defeated by Alison Riske in three sets. Following the Australian Open, Görges’ ranking rose to No. 31. After failing to qualify for Dubai, losing to Sorana Cîrstea in the second qualifying round, Görges participated in Doha, where she lost in the first round to Maria Sakkari.

Görges opted to withdraw from the US Open season, citing safety concerns due to the COVID-19 pandemic. Her first tournament following the suspension of the WTA Tour was at Rome, where she lost to Danka Kovinić in the first round, winning just one game. She next participated at the French Open, where she defeated Riske in the first round, before losing to Laura Siegemund in the second round. Following these tournaments, Görges’ ranking fell to No. 45, her lowest ranking since 2016. On 21 October, Görges announced her immediate retirement from tennis on her website.

Announced Her Retirement From Tennis

Former Wimbledon semifinalist Julia Goerges announced her retirement from tennis Wednesday at the age of 31.

The German reached her highest ranking of ninth in the world in 2018 and was ranked 45th at her retirement. Her most recent match was a second-round loss to fellow German Laura Siegemund at the French Open.

Goerges, in a letter addressed to the game of tennis, wrote that she was “ready to say ‘goodbye’” after a 15-year pro career.

“I always knew how I would feel when it is time to say goodbye to you, and that moment has arrived. I am ready to close the tennis chapter of my life and open a new one, which I am really excited about,” she added.

Goerges reached the Wimbledon semifinals in 2018 before losing in straight sets to Serena Williams. She was runner-up in mixed doubles at the French Open in 2014 alongside Nenad Zimonjic and was a finalist in the Fed Cup with Germany in 2014.

Goerges finishes with a 7-10 record in tour-level singles finals. Her most notable titles came in 2011 in Stuttgart, and in 2017 in Moscow and at the WTA Elite Trophy in Zhuhai.

“Julia’s powerful playing style, exemplary sportsmanship and thoughtful nature made her a fantastic ambassador for women’s tennis and a fan favorite around the world,” said Steve Simon, chief executive of the WTA.