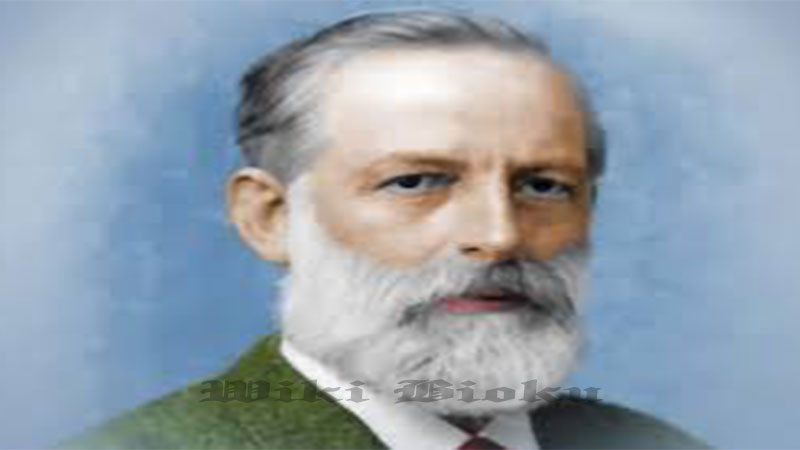 Julius Lothar Meyer was a German chemist who was instrumental in the creation of the first periodic table of elements.

Lothar Meyer never took credit for publishing the first periodic table of elements. Russian chemist Dimitri Mendeleev is widely credited with its creation in 1870. However, Lothar Meyer printed a preliminary scheme to arrange the elements by atomic weight in 1864, six years before Mendeleev.

Julius Lothar Meyer was born on this date August 19 in 1830. Photo by Wilhelm Hornung. #OTD pic.twitter.com/hWAa363WLn

The Google Doodle depicts Lothar Meyer in the lab, in an illustration featuring his iconic beard and his graph, the Lothar Meyer arrangement. Lothar Meyer died at age 64 on April 11, 1895, but he would have been 190 today. He was born on August 19, 1830, in Varel, Oldenburg, Germany.

“Happy birthday, Julius Lothar Meyer, and thank you for braving the elements for the sake of scientific knowledge!” Google writes.

Julius Lothar Meyer was educated as a physicist, but he became known in history for his groundbreaking work in chemistry – laying the foundation for the periodic table of elements. His interests primarily lay in chemistry and physics. Lothar Meyer was born Aug. 19, 1830, in Varel, Oldenburg, Germany, and died April 11, 1895, at age 64 in Tübingen, Germany, according to Brittanica.

Lothar Meyer worked as a science educator beginning in 1859 and was appointed to several positions before he became a chemistry professor at the University of Tübingen. He died in the university town where he worked as a professor.

Did you see today’s #GoogleDoodle featuring chemist Julius Lothar Meyer? He was born #OTD in 1830. Learn more about his contribution to the periodic table–and why he’s less well-known today than Dmitri Mendeleev. #histSTM #Distillations https://t.co/Oz0Oc5vwZ5

“Though originally educated as a physician, he was chiefly interested in chemistry and physics,” Brittanica said. “In 1859 Meyer began his career as a science educator, holding various appointments before serving as professor of chemistry at the University of Tübingen (1876–95).”

Everyone get a chance to check out the chemistry themed google doodle today?! https://t.co/0oo2KeD9dW

The development of the first periodic table of elements is widely credited to Dimitri Mendeleev, a Russian chemist who started the development of the periodic table of elements in 1869, according to Lenntech. This was five years after Julius Lothar Meyers’s preliminary scheme arranging elements by atomic weight was published in 1865. It was called the Lothar Meyer arrangement, or the Meyer graph.

“In 1869 Russian chemist Dimitri Mendeleev started the development of the periodic table, arranging chemical elements by atomic mass. He predicted the discovery of other elements, and left spaces open in his periodic table for them,” Lenntech wrote on its periodic table history.

Lothar Meyer worked independently of Mendeleev in developing his periodic classification of chemical elements. Although the preliminary work appeared in his publication, he did not publish his table until 1870, one year after Mendeleev, according to Brittanica.

“He did not claim priority for his achievement, and he admitted that he had been reluctant to predict the existence of undiscovered elements as Mendeleyev had done,” Brittanica said.

Both Julius Lothar Meyer and Dimitri Mendeleev received the high honor of the Royal Society’s Davy Medal for their work on the periodic table of elements in 1882. The Davy Medal is awarded annually for research in chemistry. The first Davy Medal was awarded in 1877 to Humphry Davy FRS, the inventor of the Davy Lamp.

The Royal Society’s Davy Medal past winners list “D Mendelejeff and Lothar Meyer” “For their discovery of the periodic relations of the atomic weights.”

“Indeed, the joint award has been cited as evidence that what was seen by some to be especially valuable about Mendeleev’s table was how it accommodated (as Meyer’s also did) the elements that were known, and not so much for Mendeleev’s predictions of new elements,” Donald wrote. “Was the Royal Society hoping too, through the joint award, to muffle the disquiet about priority or credit for the increasingly indispensable table? Perhaps. But if that were the intention, they failed. In science as in politics, the temptation to be simple rather than accurate can be quite strong. Scientists still say, ‘Mendeleev discovered the periodic table.’”

Julius Lothar Meyer published a book, “Die moderne Theorien der Chemie,” or “Modern Chemical Theory,” in 1864. The book was a lucid treatise on the fundamental principles of chemical science, according to Britannica. It also contained a preliminary scheme for the arrangement of elements by atomic weight and discussed the relation between the atomic weights and the properties of those elements.

Lothar Meyer’s work on the periodic table was influential. The preliminary scheme was enlarged and reprinted in many editions. He published an expanded table in 1868, which was similar to the periodic table of elements produced by Russian chemist Dimitri Mendeleev in 1870, according to Brittanica.

“This influential work was often enlarged and went into many editions,” Brittanica wrote. “In about 1868 Meyer prepared an expanded table, similar in many ways to Mendeleyev’s table published in 1869.”

An article published in 1895 in the “Scientific American, a few months after Lothar Meyer’s death, attributed much of the credit for the periodic table of elements to Dimitri Mendeleev. However, it also said Meyer developed his concepts on periodic law independent of Mendeleev. The article, written by chemist M. M. Pattison Mui, also discussed the controversy between Mendeleev and Meyer, and their groundbreaking discoveries.

“The clear enunciation, and the application in detail, of the most far-reaching generalization that has been made in chemistry since the work of Dalton, must, undoubtedly, be credited to that great chemist Mendeleev,” the article said.

Pattison Mui continues, “Nevertheless, a perusal of the controversy between Mendeleev and Meyer shows, I think, that Meyer arrived at the fundamental conception of the periodic law independently of Mendeleev.”