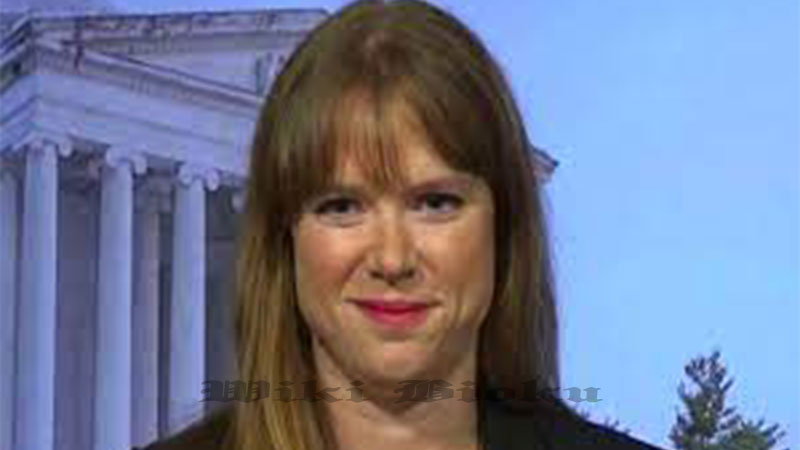 Kate Bedingfield is one of Democratic presidential nominee Joe Biden’s most visible advocates on the campaign trail. As the deputy campaign manager and the director of communications, Bedingfield frequently appears on broadcast and cable network shows to promote Biden’s message.

Bedingfield is a Georgia native. According to the Atlanta Journal-Constitution, she grew up in a northern Atlanta suburb. The newspaper wrote that Bedingfield attended Sandy Springs Middle School and Riverwood High School. Bedingfield went on to the University of Virginia for college, according to the White House.

During an appearance on CNN on October 7, Bedingfield was asked about why Biden and his running mate, Senator Kamala Harris, have not directly answered the question as to whether a Biden administration would consider packing the Supreme Court.

Just 18 months into the job, Bedingfield was promoted to Vice President of Corporate Communications. In this role, she also served as the organization’s chief spokesperson, according to a news release announcing the promotion.

Online piracy was on the rise during Bedingfield’s tenure at the MPAA. In September 2013, the MPAA accused Google of making the problem worse, Wired reported at the time. The organization issued a report that claimed Google’s search engine directed searchers to illegal websites.

Bedingfield worked with former Senator Chris Dodd at the MPAA. He was the organization’s chairman from 2011 until 2017. Dodd has a long working history with Biden, having represented Connecticut in the Senate for 30 years. Politico, citing Biden “associates,” reported that the two men were sometimes described as having a brotherly relationship. Dodd returned to the political scene earlier this year when he served on Biden’s vice-presidential selection committee.

Bedingfield returned to the Obama administration in August 2015 when Biden hired her as his new communications director. Biden praised Bedingfield in a news release: “Kate is a talented individual who brings a range of communications experience to the team. She will be a key advisor to me, a terrific asset to our office, and an important member of the entire White House organization.”

Bedingfield was hired amid rampant speculation about whether Biden would run for president in 2016. As the Hill reported, Bedingfield returned to the White House to promote Biden’s activity as the vice president. Any campaign activity would have been limited since she was a White House staffer.

After the 2016 election, Bedingfield took another position in the private sector. According to the Washington Business Journal, she was hired as the vice president of communications for Monumental Sports & Entertainment in Washington, D.C.

During a Q&A with the newspaper, Bedingfield shared that her favorite spot in the White House was the “colonnade between the West Wing and the Residence, running alongside the Rose Garden.” She admitted her worst habit as a leader was that she was “not always as quick to delegate right out of the gate as I should be.” Bedingfield said that if she were president, she would pass an executive order reinstating a policy that protects women in the workplace. On a more lighthearted topic, Bedingfield said the celebrity she had been most excited to meet was screenwriter Aaron Sorkin.

Kate Bedingfield Has Extensive Experience As A Campaign Operative

Bedingfield has extensive experience as a campaign operative. During the 2008 primary cycle, Bedingfield was a campaign spokesperson for John Edwards, the former senator from North Carolina. As the Associated Press pointed out, Bedingfield at times criticized her future boss, then-Senator Barack Obama, as she defended Edwards. Edwards dropped out of the primary race in January 2008.

Bedingfield quickly found another candidate to support after Edwards withdrew from the race. She went to work for the former governor of New Hampshire, Jeanne Shaheen, who had launched a run for the U.S. Senate. Bedingfield served as Shaheen’s communications director. Shaheen ultimately won the election.

Bedingfield returned to Biden’s staff in April 2019 as his campaign’s communications director. In her role, Bedingfield is instrumental in shaping Biden’s message. According to Fortune, she oversees approximately 100 campaign staffers as the deputy campaign manager. The magazine put Bedingfield on it’s 2020 “40 under 40” list.

According to Bedingfield and Kieve’s 2013 wedding announcement in the New York Times.

Bedingfield is a Georgia native. According to the Atlanta Journal-Constitution, she grew up in a northern Atlanta suburb. The newspaper wrote that Bedingfield attended Sandy Springs Middle School and Riverwood High School. Bedingfield went on to the University of Virginia for college, according to the White House.https://web.archive.org/web/20201023210719if_/https://www.instagram.com/p/BsCEclAgZOG/embed/captioned/?cr=1&v=12&wp=658&rd=https%3A%2F%2Fwikibiouk.com&rp=%2Fkate-bedingfield-wiki-biography%2F#%7B%22ci%22%3A0%2C%22os%22%3A23048.80000001192%7D

Bedingfield has primarily worked from home since the coronavirus pandemic prompted shutdowns in mid-March. Bedingfield wrote an editorial for Working Mother about what it has been like managing a campaign with two children underfoot. (Her son, Hugh, is six and daughter Margot is two). She shared that Biden gets a kick out of seeing her children on Zoom calls:

If the VP has an interview scheduled, before he sits down with a reporter, I will make sure he has what he needs for whatever questions he might be asked. Because I’m working from home, Hugh and Margot will often make an appearance on these prep calls. The fact that I’m talking to the former Vice President of the United States doesn’t faze them a bit. It doesn’t faze Joe Biden, either. He will almost always stop to say hi to them and wave. They wave right back.

I have never once worried when the kids Zoom-bomb a conference call with him, because if anyone understands the realities of juggling work and family, it’s my boss. Joe Biden has taken care of aging parents. And after he lost his wife to a tragic car accident, he was a single parent himself for a few years when his two sons were young. He reminds us all the time that family comes first in all things and that his expectation is that his staff will always put the needs of our families ahead of work. Even when that means kids interrupting Zoom calls.

Bedingfield added that she was grateful for her mother’s help with the children. She said her mother often visited to watch the kids, which enables Bedingfield and her husband to get work done. “She is our hero and there is no way we could do this without her help,” Bedingfield wrote.