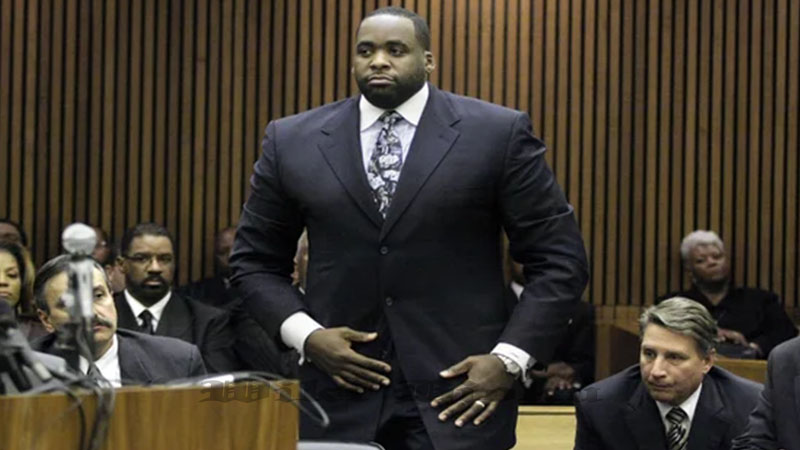 Kwame Kilpatrick is an American former politician who served as a Democratic Michigan state representative from 1997 to 2002 and mayor of Detroit from 2002 to 2008. Kilpatrick resigned as mayor in September 2008 after being convicted of perjury and obstruction of justice. He was sentenced to four months in jail and was released on probation after serving 99 days.

On May 25, 2010, Kilpatrick was sentenced to eighteen months to five years in state prison for violating his probation, and served time at the Oaks Correctional Facility in northwest Michigan. On March 11, 2013, he was convicted on 24 federal felony counts, including mail fraud, wire fraud, and racketeering. On October 10, 2013, Kilpatrick was sentenced to 28 years in federal prison. Kilpatrick is currently serving his sentence at the Federal Correctional Institution, Oakdale, in Oakdale, Louisiana.

Kilpatrick attended Detroit’s Cass Technical High School and graduated from Florida A&M University with a Bachelor of Science degree in political science in 1992.

Kwame Kilpatrick was born June 8, 1970, to Bernard Kilpatrick and Carolyn Cheeks Kilpatrick. His parents divorced in 1981.

He has a sister Ayanna and a half-sister, Diarra.

Kilpatrick’s mother Carolyn was a career politician, representing Detroit in Michigan House of Representatives from 1979 to 1996 and serving in the United States House of Representatives for Michigan’s 13th congressional district from 1996 to 2010. She was not re-elected to office because she lost her primary election on August 3, 2010 to State Senator Hansen Clarke. NPR and CBS News both noted that throughout her re-election campaign, Carolyn was dogged by questions about her son Kwame following his tenure as mayor of Detroit.

Kilpatrick’s father Bernard was a semi-professional basketball player and politician. He was elected to the Wayne County Commission, served as head of Wayne County Health and Human Services Department from 1989–2002, and as chief of staff to former Wayne County Executive Edward H. McNamara. Later he operated a Detroit consulting firm called Maestro Associates

Former Detroit Mayor Kwame Kilpatrick will be released from prison this week, his sister reportedly claimed earlier this week.

“Due to suffering severe health challenges we expect Kwame Kilpatrick to receive a grant for COVID-19 compassionate release from the [Federal Bureau of Prisons] this week,” Ayanna Kilpatrick tweeted Sunday, according to FOX 2 in Detroit. She attributed the statement to their family. “We are extremely grateful to God and we thank each and every one who has kept him and his family lifted in prayer.”

He was ultimately denied the May effort to get him on home confinement at the time, the Detroit News reported.

Federals officials, however, have not confirmed Kilpatrick’s release, according to The Detroit News.

Kilpatrick was sentenced in 2013 to 28 years for corruption and racketeering.

The former mayor was in office from 2002 to 2008. He was convicted in 2013 on charges of racketeering conspiracy, fraud, extortion and tax crimes related to shaking down contractors and rewarding his allies. The government called the scheme the “Kilpatrick enterprise.”

In a February letter to President Trump, the Ebony Foundation, a nonprofit dedicated to combating mass incarceration, argued that Kilpatrick’s lengthy sentence was not appropriate for his crimes.

Kilpatrick has been incarcerated at a low-security prison in Indiana. He is officially scheduled to be released in January 2037.

“The thing that makes the whole thing difficult for Kwame is the length of time he has left to go on his sentence,” Harold Gurewitz, one of Kilpatrick’s lawyers, told The Detroit News. “I’m a little bit suspicious.”

Kilpatrick has maintained his innocence and has filed several appeals. He also has supporters in the FreeKwameProject dedicated to getting him released from prison, FOX 2 reported