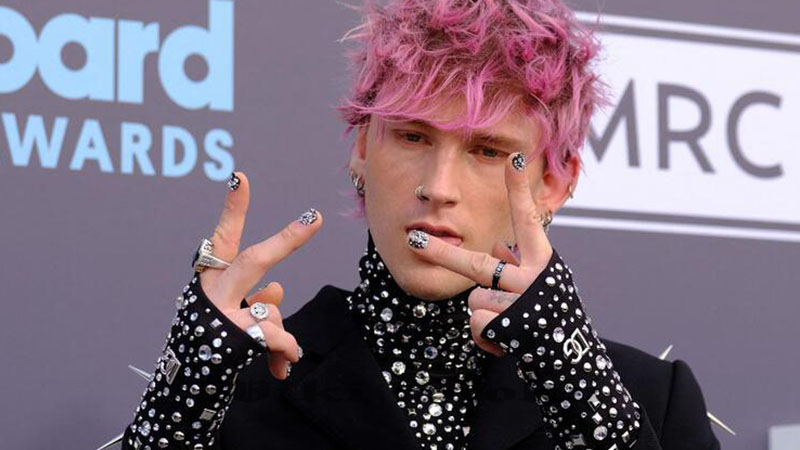 Richard Colson Baker, known professionally as Machine Gun Kelly (MGK), is an American rapper, singer, songwriter, and actor. His debut album, Lace Up, was released in 2012, and was followed up with four subsequent studio releases. As an actor, Baker made his film debut in the 2014 romantic drama Beyond the Lights. He has also appeared in several other films and had a recurring role on the Showtime series Roadies in 2016.

He embarked on a musical career as a teenager, releasing a mixtape in 2006. He went on to release four more mixtapes. Baker then secured a recording contract with Bad Boy and Interscope Records in 2011. His major label debut album, Lace Up, was released in October 2012 to positive response from critics. The record contained the singles “Wild Boy”, “Invincible”, “Stereo”, and “Hold On (Shut Up)”, and debuted at number four on the US Billboard 200 chart; it was later confirmed to have sold more than 178,000 copies.

In early 2015, Baker released the singles “Till I Die” and “A Little More” for his second studio album, General Admission, which released in October 2015, and debuted at number four in the US. The album incorporated darker tones and storytelling, with elements of rap rock and R&B. His third studio album, Bloom, was released on May 12, 2017, preceded by “Bad Things” with Camila Cabello, peaking at number 4 on the Billboard Hot 100 and becoming his highest-charting single. His fourth studio album, Hotel Diablo, was released July 5, 2019, and was supported by three singles: “Hollywood Whore”, “El Diablo”, and “I Think I’m Okay” (featuring Travis Barker and Yungblud). His fifth studio album, Tickets to My Downfall was released on September 25, 2020, marking a departure from rap in favor of a pop punk genre, with production entirely helmed by Barker.

Richard Colson Baker was born on April 22, 1990, in Houston to missionary parents. Baker and his family moved all around the world and took up residence abroad from Egypt to Germany, as well as throughout the United States, in Chicago, Denver, and Cleveland. He settled in Denver, along with his father, after his mother had left home, and the pair moved in with Baker’s aunt. Following his father suffering from depression and unemployment, Baker endured bullying from other children in the neighborhood. He started listening to rap in the sixth grade, when he attended Hamilton Middle School, a school with an ethnically diverse student body in Denver, Colorado. The first three rappers that got him into the genre of hip hop as a child were Ludacris, Eminem and DMX, with Baker gaining interest in the genre after listening to DMX’s “We Right Here” from the album The Great Depression (2001).

Following his father’s departure, Baker stopped attending school and began to make a name for himself by calling out elder classmates. In 2005, his father returned to take them both to Kuwait before the pair were forced back stateside to Cleveland, where Baker attended Shaker Heights High School. While attending Shaker Heights High, he convinced a local t-shirt shop owner to become his manager, as the shop owner would double as an MC manager. Given the stage name “Machine Gun Kelly” by his fans due to his rapid-fire delivery, he released the mixtape Stamp of Approval (2006). The release of the mixtape allowed for his reputation and profile to grow, which allowed Baker to begin performing at local Cleveland venues.

Baker made his film debut in Beyond the Lights (2014), a romantic drama in which he played a “shallow, self-important” rapper named Kid Culprit. In 2016, he featured in four more films of various genres, including The Land, a Cleveland-set drama produced by fellow rapper Nas. In the same year, he had a recurring role on the Showtime comedy-drama series Roadies as Wes, a former Pearl Jam roadie. He played Felix in the Netflix film Bird Box (2018), and portrayed drummer Tommy Lee in The Dirt, a 2019 Netflix drama about Mötley Crüe. His most recently released movie is Big Time Adolescence, which premiered at Sundance Film Festival in 2019. Baker was also featured in two episodes of MTV’s Wild ‘n Out in 2013 and 2017.

Kelly, whose real name is Colson Baker, is currently dating actress Megan Fox. The two met while filming Midnight in the Switchgrass and went public with their relationship over the summer. (Fox and her husband of 10 years Brian Austin Green separated late last year.)

In an interview with NYLON last month, Kelly opened up about his romance with Fox, which he said came at a time when love is not “being encouraged.”

“In fact, it’s exactly the opposite: everything now is isolation, dehumanization, separation,” he said. “And f—, dude, you have in your head that you’re this rock star, with multiple women and all that.”

“So finding someone that can take you out of the fast lane and make sure that you’re safe, because at any minute you can crash—I love that it can evolve into that,” he added about Fox, 34.

The purple sports car was reportedly discovered by the Los Angeles Police Department in a driveway with the engine still running.

According to TMZ, the “Bad Things” singer’s purple Aston Martin was recovered by the Los Angeles Police Department on Sunday night, nearly a week after the sports car was reported missing.

The officers that found the car were on patrol Sunday night when the Aston Martin — being driven by an unknown suspect — reportedly sped past them, according to TMZ. The cops later searched for the car and found it abandoned in the driveway of a house with the engine still running.

The suspect, or suspects, fled the scene before the officers arrived and have yet to be identified, according to TMZ.

As of Monday, TMZ said the car had yet to be returned to Kelly, 30, but was reportedly impounded by the cops and said to be in good condition.

The LAPD has not immediately responded to PEOPLE’s request for comment. A rep for Kelly has also not yet responded.

“I got a call from the new owner of Valley Vista,” said Lewis, 50. “We’re friendly. So, she called me up and she said, ‘Jeff, we got a problem.’ She goes, ‘Do you know how to rewind the cameras?’ And I said, ‘Well, I don’t, but call Brett, the AV guy.’ And she’s like, ‘Okay, because Machine Gun Kelly’s car got stolen in his driveway. His Aston Martin.’ ”

Lewis added, “You don’t leave an Aston Martin in the driveway in Los Angeles.”