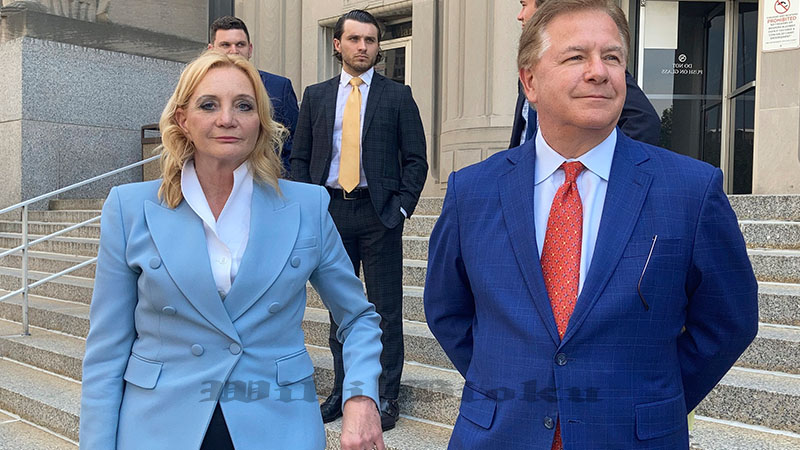 A couple from St. Louis have been caught on video pointing a rifle and a handgun at passing peaceful protestors who walked by their home.

Husband and wife, Mark and Patricia McCloskey who are both personal injury lawyers, could be seen aiming the guns at demonstrators who walked by their palatial property in the wealthy Forest Park neighborhood at around 6 pm on Sunday.

At one point, the pair seemed to be unknowingly pointing their weapons at one another while trying to keep protesters away.

One video posted to Twitter shows the woman holding her gun at a protester who is wearing a t-shirt that reads, ‘Hands up, don’t shoot.’

The individual appeared to be trying to get people to move away from the house at the time.

The couple confronted the group of about 300 protesters after they broke down a gate in the neighborhood, according to NBC News.

The protesters were en route to Mayor Lyda Krewson’s home to demand her resignation after she released the names and addresses of residents who had suggested defunding the police department.

An online petition started over the weekend calling for her to resign has generated more than 40,000 signatures.

On Friday night, Mayor Lyda Krewson issued a statement apologizing for her actions. The full statement is below:

‘In an effort to be transparent and accessible to the public during the Covid-19 pandemic, for more than three months now I have been doing tri-weekly community updates on Facebook.

‘Tonight, I would like to apologize for identifying individuals who presented letters to me at City Hall as I was answering a routine question during one of my updates earlier today.

‘While this is public information, I did not intend to cause distress or harm to anyone. The post has been removed.’

As hundreds of protesters marched toward Mayor Lyda Krewson’s house this evening they were met by a surprising sight — a gun-swinging couple on the lawn of their Central West End mansion.

The couple, personal injury attorneys Mark and Patricia McCloskey, shouted at marchers who seemed to be just passing through the gated community.

A video recorded by freelance photographer Theo Welling for the Riverfront Times shows Mark, dressed in a pastel pink polo shirt and khakis, brandishing a rifle with an extended clip while Patricia, wearing a black-and-white-striped top with capri pants, casually holds a small handgun.

The protesters were walking to Krewson’s house for a demonstration, part of the backlash the mayor is facing for broadcasting on Facebook Live the names and addresses of advocates for defunding the police department.

Multiple people marching tonight filmed the scene in front of the McCloskeys, and various angles show the couple sweeping their weapons in the direction of protesters who were standing on the sidewalk or walking past.

At one point, a barefoot Patricia, whose law firm bio says she is a member of the Missouri Bar Association ethical review panel, crosses the lawn and stumbles briefly while she has her gun aimed at protesters. It’s not clear if the guns were loaded.

The McCloskeys are apparently very proud of their house, welcoming St. Louis Magazine in 2018 for a tour of the Renaissance-style palazzo that was originally built by a Busch heiress and her husband, but it’s unclear what prompted them to grab their guns and pop-out front, shoeless but armed, to confront nonviolent protesters.

We called the after-hours number for the couple’s law firm, and a woman answering the phone said the McCloskeys couldn’t be reached until morning.

After the brief, but intense encounter, marchers continued down the street. Some in the crowd shouted, “Let’s go! Let’s go!” at stragglers.

The procession continued to Krewson’s house, where hundreds of people filled the street, extending into her yard and front porch. Activists have called for her resignation for doing her constituents on Friday. After initially declining to say she was sorry, the mayor issued an apology through social media and news outlets on Friday night.