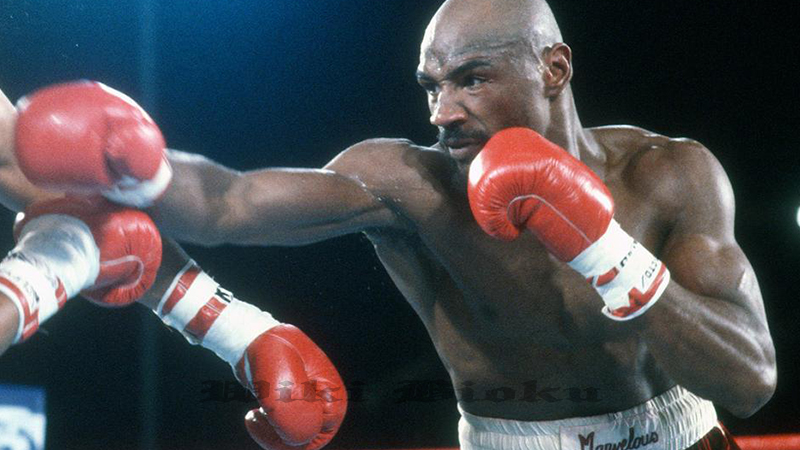 Marvelous Marvin Hagler has died at the age of 66-years-old.

Former middleweight southpaw boxer Robbie Sims is Hagler’s brother. Hagler had five children with his first wife, Bertha: Charelle, Celeste, James, Marvin Jr., and Gentry. Although he owned a home in Bartlett, New Hampshire, Hagler lived in Milan. In May 2000, he married his second wife Kay, an Italian, in Pioltello, Italy.

Hagler became the undisputed middleweight champion in 1980. He famously defended his title against Tommy Hearns in 1985 in a brutal three-round fight billed as “The War.” After 12 successful title defenses, the boxing icon’s career and reign as champion ended in 1987 in a controversial 12-round split-decision loss to “Sugar” Ray Leonard. He announced his official retirement the following year and moved to Italy, where he became an actor in action films. During his professional boxing career, Hagler notched 62 wins, 3 losses and 2 draws, with 52 wins by knockout. He was inducted into the International Boxing Hall of Fame in 1993.

Many in the boxing community mourned the loss of Hagler, paying respects to the man who dominated the middleweight division for nearly a decade. Former boxing champion Oscar De La Hoya said, “Saddened to hear about the death of Marvelous Marvin Hagler. One of the greatest to ever step in the ring!” Boxing promoter Bob Arum said of Hagler, “He was a man of honor and a man of his word, and he performed in the ring with unparalleled determination. He was a true athlete and a true man. I will miss him greatly.”

On March 13, 2021, Hagler’s wife Kay announced that Hagler had died unexpectedly at his home in New Hampshire, at the age of 66.

“I am sorry to make a very sad announcement,” his wife posted on Facebook. “Today unfortunately my beloved husband Marvelous Marvin passed away unexpectedly at his home here in New Hampshire. Our family requests that you respect our privacy during this difficult time. With love.”

Marvelous Marvin Hagler was among the greatest athletes that Top Rank ever promoted. He was a man of honor and a man of his word, and he performed in the ring with unparalleled determination.

He was a true athlete and a true man. I will miss him greatly. pic.twitter.com/RjNSlayBwA

“This one hits so hard also because he was the one I emulated my own training camps after when I saw how seriously he took his training camps. ” He added: “Not only was he a living legend, but I was proud to call him my friend. He was so full of life, energy, and positivity in our conversations that you would never guess what a wrecking machine he was in the ring.

“Our wives would speak on the phone to connect us and I’ll miss his voice saying ‘It’s Marvelous’ on the other end of the line.”

Former world featherweight champion Barry McGuigan said he was “shocked and deeply saddened” to hear of the “incredible” Hagler’s death.

The Irishman added: “I’m honored to have spent some amazing times with him. My heartfelt sympathies to his wife Kay and his family. Rest in Peace Champ.”

British heavyweight Derek Chisora said Hagler was “one of the greatest”.

Before the world super flyweight unification fight between Juan Estrada and Roman Gonzalez in Dallas on Saturday night, a “memorial count of 10” was led by ring announcer Michael Buffer, with the bell rung 10 times in Hagler’s memory.