May Bell Boyce is the Tennessee liquor store owner charged with aggravated assault with a deadly weapon after police said she shot a man she believed was trying to rob the store. The man, identified as Ramon Fisher, was hit in the back but was expected to recover, Nashville Police said.

May Bell Boyce is 88 years old.

Who was Joel Schumacher? Wiki, Biography, Age, Family, Career, Cause of Death, Instagram, Net Worth

The confrontation at Boyce’s liquor store happened around 8:30 p.m. on June 16. According to the affidavit, Boyce told investigators that two Black men entered the store and first walked to the back of the store where the vodka was stored. She said one of the men then approached her at the counter “in such a manner that she felt they were going to steal from her.” The report does not provide additional details about why Boyce arrived at that conclusion.

Boyce said she grabbed her gun, which was wrapped in cloth, and placed it next to the register. She told police one of the men, who has not been identified, asked her for brown liquor. The shooting victim, identified as Ramon Fisher, picked up two bottles. Boyce explained that Fisher’s demeanor led her to believe he was going to steal the two liquor bottles.

She moved to the opening of the counter to face Fisher. Boyce claimed Fisher then “lunged towards her in a manner that made her think that he might push her down” before running toward the store’s exit.

Boyce told police that as Fisher moved toward the exit, she picked up her gun and stepped out from the counter. According to the affidavit, she thinks she yelled at him to “Stop” but she wasn’t positive about that.

Boyce said she aimed the gun at the floor in his direction and pulled the trigger. But instead of shooting the ground, Fisher was hit in the back. The affidavit states Fisher yelled out that he had been shot and fell into a stack of bottles. The second man grabbed Fisher and helped him out the door.

The gun Boyce used was a .38 Smith & Wesson snub-nose revolver, Fox News reported. She told the New York Post she hadn’t meant to shoot Fisher but wanted only to scare him. She added that she had never fired a weapon before.

Boyce did not express remorse for shooting Fisher in an interview with the New York Post and insisted that she simply did what she “had to do.” She told the newspaper her store has been robbed several times in the past few years and she is “fed up” with feeling afraid. She explained to the Post:

I hope word gets out on the street that I’m fed up and I’m not taking it anymore. You’ve got to stick up for yourself sometimes… After you’ve been played for a fool by people stealin’ from you for years, you get fed up. And don’t put me in the category of a little old lady. I know how to take care of myself.

A friend of Boyce’s named Carson Burch defended her on Facebook as a “sweet old lady who minds her own business.” Burch claimed Boyce was assaulted when her store was robbed two months prior and that she wears a brace on her wrist as a result of the injury.

Ramon Fisher admitted that he was under the influence of drugs and alcohol when he entered Boyce’s liquor store on June 16, according to the criminal affidavit. He was taken to Vanderbilt Hospital after the shooting and that’s where detectives interviewed him. The affidavit notes that Fisher “was already on medications” when police arrived to get his statement.

Fisher initially admitted to police that he had intended to steal liquor from Murfreesboro Road Liquor and Wines on June 16. But he changed his statement the following day and insisted that he was going to pay for the alcohol.

Boyce has been arrested at least once before. According to public records with the Davidson County Criminal Court, she was accused of selling alcohol to a minor on June 30, 2006, and was arrested three weeks later.

Fisher told the investigators he had been using cocaine and alcohol that day. He also confessed that he and his friends entered Boyce’s store with the goal of stealing liquor. “He stated that in the attempt to steal from Mrs. Boyce, she shot him once in the back.”

But Fisher provided a different account when detectives followed up with him the next day. In the second interview, Fisher denied planning to steal the alcohol and insisted that he and his friend were going to pay for it. He identified the second man only by a nickname, “One Eye.” Fisher also denied running toward the exit.

The charge, a Class A misdemeanor, carried a potential punishment of several months in jail or a fine. But court records show the case was dismissed in March 2007 and Boyce was not required to pay any court fines. 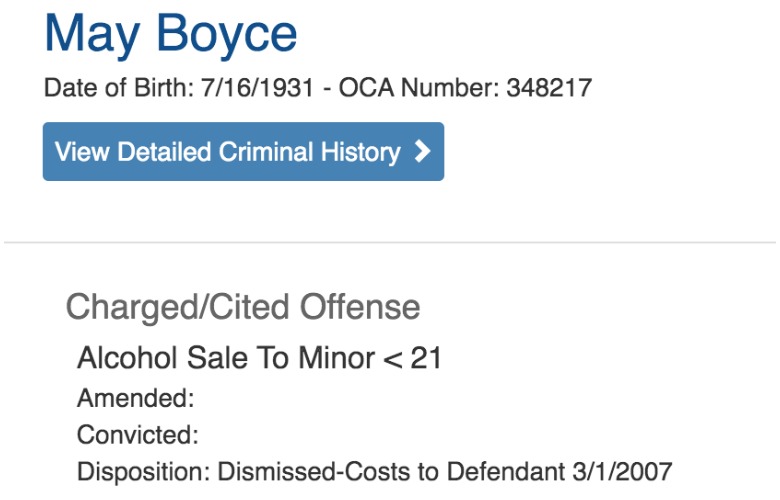 Records with the Tennessee Secretary of State’s office confirm Boyce has been in business since 1994. The liquor store is called Murfreesboro Road Liquor and Wines, but she registered the business under the name “Southpaw Inc.”

More about this author
Author 717 Posts