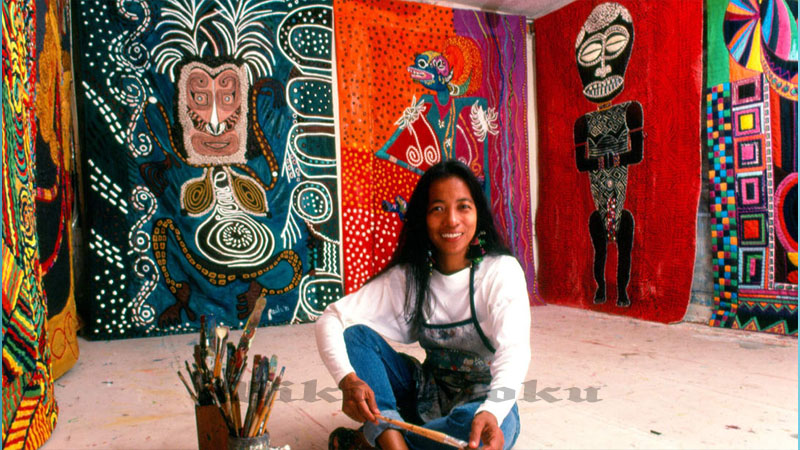 Pacita Abad was a Filipino artist who was honored with a Google Doodle on July 31.

Abad was born in Basco, Batanes, an island in the South China Sea in 1946. The island is located between Luzon and Taiwan. Abad left her homeland in 1970 and began her career in art in the United States. Abad studied at the Corcoran School of Art in Washington D.C. and at The Art Students League in New York City. In 1984, Abad was the first woman to be given the Ten Outstanding Youn Men award.

According to Abad’s profile on the U.S. Department of State website, following Abad’s graduation she “never stopped traveling or painting.” Abad is quoted as saying that while she was traveling she began to “paint the globe.” Abad lived on five continents and spent time in Sudan, Yemen, Afghanistan, and New Guinea. Abad’s work can be “characterized by constant change, experimentation, and development from the 1970s, right up until her passing,” according to the state department website.

Abad’s profile on Artsy.Net says that she was influenced in the 1970s by social realist painter Ben Shahn. That led Abad to create works that portrayed refugees and “urban street scenes.” Abad’s website says that following her graduation from college, she “never stopped being a gypsy.”

Abad said in an interview that her ideal working space was wherever she found herself that could sometimes be a hotel room. Abad said that her mother and sister would regularly help her sew, according to Duque’s essay in The Philippine Star.

Abad’s Brooklyn Museum profile says that she studied political science at the University of the Philippines, graduating in 1970.

Pacita Abad has died at the age of 58  years.

During her career, Abad worked on canvas, paper, bark cloth, metal, ceramics, and glass. Abad is credited with creating more than 3,5000 works. Her work has been displayed in more than 70 countries. Among her most famous works was her artwork on a more than 150 feet long bridge in Singapore, which was one of her final works.

Abad was married for a period of time to fellow artist George Kleiman. It was Kleiman who introduced Abad to the artistic scene in San Francisco. Their marriage ended in divorce. Following her marriage, Abad returned to Asia to hitchhike with the man who would become her second husband, Jack Garrity. Abad met Garrity in 1973.

According to his LinkedIn page, Garrity is the director of the Pacita Abad Art Estate in Washington D.C. A Philippine Daily Inquirer article in 2018 said that most of Abad’s work remains in private storage.

Garrity remarried a woman named Kristi. Mary Jessel Duque wrote in The Philippine Star in September 2018 that thanks to Garrity’s work at the World Bank, the couple regularly traveled to the developing world.

Abad is quoted on her Brooklyn Museum profile as saying, “I have a social responsibility for my painting, to try to make our world a little better.” Abad’s profile closes with a quote addressing her feminism:

Although I have tried to raise awareness of these issues through my paintings, I know that it is but a small effort to help address these problems and so much more needs to be done. As women, we all have an obligation to help improve the lives of other women, both in our own countries and around the globe.

Garrity was quoted in 2018 as saying of his wife:

Pacita was global even long before the long arms of globalization embraced the art world. But more than that, her understanding of the global and the global artist was complex and compassionate — an understanding that is called for in the times now. This is the impetus for re-introducing and revisiting her work. What does it mean to be a global artist? How can we learn from artists who have been forging these arts long before you could see a BenCab hanging [next to] an international artist in a convention in Hong Kong?

Upon arrival in the U.S., Abad studied Asian history and law at the University of San Francisco. Abad worked as a typist and seamstress during this time. More Facts

Abad died in December 2004 following a battle with throat cancer at the age of 58. Abad’s work on the Alkaff Bridge in Singapore was created a few weeks before her death. Abad’s sister, Victoria, told Channel News Asia in November 2018 that at the time Abad completed the bridge, she was in a wheelchair. Victoria Abad said, “She said to the doctor, ‘I’m going to die anyway, can’t I just finish the bridge? Why won’t you just let me work?’ She signed it in the end. That’s how amazing she was. Even in the last days of her life, she was still working.”

Abad is buried in the Fundacion Pacita Batanes Nature Lodge in Basco, Batanes.

Abad was diagnosed with lung cancer in 2001.