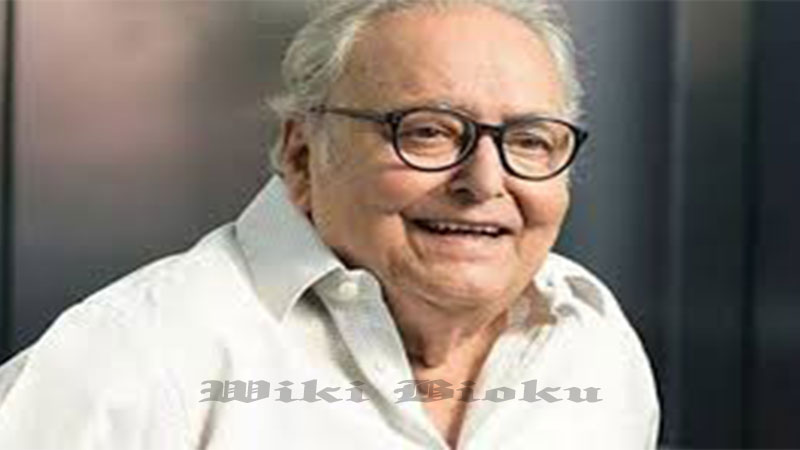 Soumitra Chatterjee was perhaps best-known for his work with Ray, one of the world’s most influential directors and maker of the much-feted Apu Trilogy. The series followed the life of a man who grew up in a Bengali village. The films garnered critical acclaim, winning many awards worldwide, and put Indian cinema on the global map.

Soumitra was born in Mirjapur Street (now this is known as Surya Sen Street) near Sealdah Railway Station, a locality in Calcutta of West Bengal, in 1935. The first ten years of his early life past in Krishnanagar in the district of Nadia in West Bengal, the town under the influence of playwright Dwijendralal Ray, also from Krishnanagar, had a flourishing theatre culture, with numerous small theatre groups. His grandfather was the president of one such group while his father, though lawyer by profession and later a government worker, also worked as an amateur actor. He started acting in school plays. Encouraged by the praise he received for his acting, gradually his interest in theatre grew with passing years, thus in late school years, he was taking acting seriously. He was a very close friend of famous theatre personality, Mrityunjay Sil who is often regarded as the person due to which Soumitra is a star.

Soumitra Chatterjee has died at the age of 85-years-old.

He will be mourned by fans and critics who avidly followed his six-decade-long career in Bengali language films.

Chatterjee, who starred in more than 300 movies, was also an accomplished playwright, theatre actor and poet.

The third movie of the trilogy, Apur Sansar, which released in 1959, was also Chatterjee’s debut film. He would go on to star as the lead actor in 14 of Ray’s films.

Pauline Kael, one of America’s most influential and respected film critics, called Chatterjee Ray’s “one-man stock company” who moved “so differently in the different roles he plays that he is almost unrecognisable”.

Chatterjee was awarded the Dada Saheb Phalke Award, the highest honour in Indian cinema, in 2012 and in 2018, he was given France’s highest award, the Legion of Honour.

He began acting when he was in school, where he starred in several plays. He was in college when a friend introduced him to Ray – it was a chance meeting, but it eventually led to Chatterjee’s film debut.

“I didn’t know what to do when Mr Ray first asked me. I didn’t know what was the real difference between stage and screen acting. I was afraid I’d overact,” he told Marie Seton, film critic and biographer, in an interview.

Chatterjee’s roles in more than a dozen films made by the auteur spanned a wide range.

He played a Sherlock Holmes-like detective in Sonar Kella, an effete bridegroom in Devi, a hot-tempered north Indian taxi driver in Abhijan, a city slicker in Aranyer Din Ratri, and a mild-mannered village priest in Asani Sanket. He also played what Seton called a “thinly veiled portrait” of Nobel Prize-winning poet Rabindranath Tagore in Charulata, one of Ray’s most admired films.

“His chief asset was the natural sensitivity of his appearance,” Seton wrote of the actor.

Ray mentored his favourite actor, lending him books on cinema and often taking him to watch Sunday morning shows of Hollywood films in Kolkata. “The entire exercise he did with a purpose, it was not as if he was taking me out on Sundays for entertainment,” Chatterjee once said.

Ray, who died in 1992, had said that Chatterjee was an intelligent actor and “given bad material, he turns out a bad performance”.

“Not a day passed when I do not think of Ray or discuss him or miss him. He is a constant presence in my life, if not for anything else but for the inspiration I derive when I think about him,” Chatterjee told an interviewer.

Over the years, Chatterjee worked with leading directors like Tapan Sinha, Mrinal Sen, Asit Sen, Ajoy Kar, Rituparno Ghosh and Aparna Sen. In 1988, he worked with John Hurt and Hugh Grant in The Bengali Night, a film set in Kolkata.

Outside films, Chatterjee was tirelessly creative: he edited a literary magazine, published more than 30 books of essays and poetry; acted, directed and wrote an equal number of plays; and painted.

One of his most successful plays, Ghatak Bidey, a comedy, ran for 500 nights. Chatterjee acted in a commercially successful Bengali adaption of King Lear, which many believe was one of his finest performances on stage.

For all his popularity, Chatterjee stayed away from Bollywood, preferring to act in Bengali language films.

“Soumitra is the finest actor in the land today, but totally unheard of outside Bengal. It’s a loss for India, Bollywood and I guess, a bit for Soumitra,” Pritish Nandy, poet, journalist and filmmaker, said of the actor in 2012.

Amitava Nag, author of a biography of the actor, says Chatterjee was “the thinking man’s hero. He was an intellectual and a poet”.

Nag once asked Chatterjee whether he felt burdened by the obligation to entertain.

The 85-year-old actor was admitted to hospital in Kolkata city on 6 October after he tested positive for the virus.

He tested negative a few weeks after he was admitted to hospital but his condition soon deteriorated and he was put on a ventilator in the last week of October. He died on Monday morning.

On 15 November 2020, Chatterjee died due to COVID-19 induced encephalopathy in Kolkata