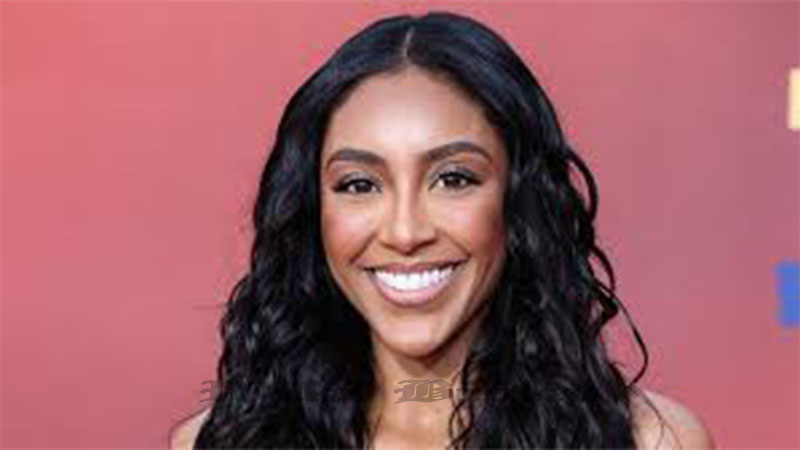 Tayshia Adams is an American television personality. She received national recognition after appearing as a contestant on season 23 of The Bachelor. Adams was one of the final two contestants, alongside Hannah Godwin, both of whom were eliminated when Colton decided to end the show to pursue Cassie Randolph. After being eliminated from the show, she appeared on season six of Bachelor in Paradise in August 2019, where she started dating fellow contestant John Paul Jones. The two split in September of 2019, prior to the show’s finale.

Tayshia Adams is a 30-year-old former Bachelor contestant who is expected to take over as lead of season 16 of The Bachelorette. In March 2020, ABC tabbed Clare Crawley to be the next Bachelorette with a premiere set for May 2020; however, the COVID-19 pandemic forced a delay of the show. But when filming began in August 2020, Crawley abruptly departed the show.

The circumstances regarding her departure are still relatively unknown (she’s rumored to have found love on the show exceptionally fast), but Adams was thrust into a replacement role and will serve as the season’s new lead instead.

Adams’ father grilled Underwood during the episode, asking him tough questions about the nature of the relationship. When Underwood asked for her father’s blessing to propose to Tayshia, he initially declined to give it, telling Underwood “straight up, I think you’re a good guy, but obviously I want to protect her and have her best interest.” After a conversation with his daughter, Adams’ father had a change of heart and said “I am content with saying ‘yes’ to Colton at this point.” Alas, the proposal never came to fruition.https://web.archive.org/web/20201020151850if_/https://www.instagram.com/p/CFValZ3FcMm/embed/captioned/?cr=1&v=12&wp=658&rd=https%3A%2F%2Fwikibiouk.com&rp=%2Ftayshia-adams%2F#%7B%22ci%22%3A0%2C%22os%22%3A18670%7D

Adams has made it no secret that Christianity is an important part of her life. In her now-deleted biography page on ABC.com, Adams even said that she traveled to Africa on a mission trip shortly before appearing on The Bachelor.

Her Instagram regularly includes references to her faith and has “Psalm 46:5” in the bio. That verse in the Bible reads: “God is within her, she will not fall; God will help her at break of day.”

While her faith didn’t play a pivotal role during her time on The Bachelor, her relationship with her family did. During a hometown date episode of the show, Adams revealed that her ex-husband was the only other boyfriend she had aside from Underwood she ever introduced to her family.

Before Adams ever made an appearance on ABC, she revealed that she loves to “poke people’s veins and draw their blood” in an introduction video posted to YouTube. Phlebotomy is the practice of puncturing a vein, usually to draw blood. Adams attended Concordia University in Irvine, Calif. and received a B.S. in Biology Medical Science to pursue the field.https://web.archive.org/web/20201020151850if_/https://www.instagram.com/p/CBevdNPFTNi/embed/captioned/?cr=1&v=12&wp=658&rd=https%3A%2F%2Fwikibiouk.com&rp=%2Ftayshia-adams%2F#%7B%22ci%22%3A1%2C%22os%22%3A18679%7D

However, after her appearances on The Bachelor and Bachelor in Paradise, Adams revealed she’s no longer working in medicine.

“I’m not practicing phlebotomy anymore,” Adams told Vulture in a 2019 interview. “I don’t know if I’ll go back into medicine. As much as I love it and went to school for it, my passion has always been in real estate, development, interior design, and architecture. I think I’m going to gravitate towards that. I’m currently working at an interior design firm, and I hope this blossoms and opens doors for my career.”

“Overcoming fear is a really good feeling and it’s amazing to have someone to do it with you,” Adams said after her bungee jumping experience with Underwood.

Adams also told Vulture that she’s signed up for scuba diving lessons. Expect upcoming contestants on The Bachelorette to have to keep up with the daring adventures of Adams.

She has also posted about her previous marriage on Instagram, once writing in a caption: “My divorce used to be something I was ashamed of, because to me it represented, not only to myself but to everyone that knew me, that I had failed at marriage, something I value so highly.” She later wrote in the caption that the journey helped make her “the strong, independent, and smiling woman I am today.”

Her divorce may be a subject of discussion in the upcoming season of The Bachelorette as well.

Adams first introduced herself to Bachelor Nation in 2019 when she was a contestant aiming to find love with Colton Underwood on season 23 of The Bachelor. She and Hannah Godwin were the final two contestants when Underwood chose to pursue a relationship with Cassie Randolph instead.https://web.archive.org/web/20201020151850if_/https://www.instagram.com/p/CBEPHsLlG_B/embed/captioned/?cr=1&v=12&wp=658&rd=https%3A%2F%2Fwikibiouk.com&rp=%2Ftayshia-adams%2F#%7B%22ci%22%3A4%2C%22os%22%3A28698.5%7D

Adams later appeared on season six of Bachelor in Paradise and began a relationship with John Paul Jones. The two split near the end of the season. They rekindled the relationship after the show ended, but split for good in October 2019, according to Glamour.

Adams will be just the second black woman to be the lead of a season of The Bachelorette. There has never been a black Bachelor, although Matt James is set to end that trend after being named the lead of season 25, which is set to air in 2021.

Adams has used her sizable social media presence for good, and has spent much of 2020 highlighting the fight for racial equality. Her Instagram bio includes the hashtag “#goodtrouble,” a reference to former Georgia congressman and civil rights leader John Lewis, who died in July 2020. The bio also provides links to get involved and donate to the Black Lives Matter movement.

In June 2020, Adams posted a photo on Instagram of herself at a Black Lives Matter protest in Newport Beach, Calif., holding a sign that read: “We’re not trying to start a racial war, we’re ending one.”

Her Twitter page has a link to a petition calling for justice for George Floyd, a black man who was killed in an arrest in Minneapolis in May.