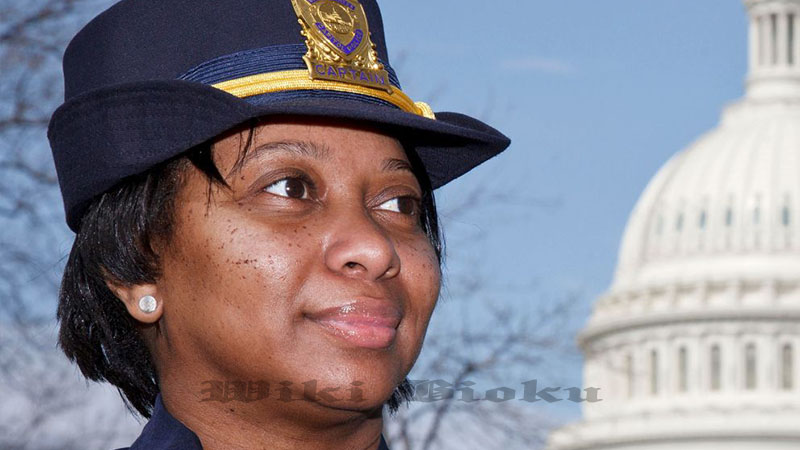 Yogananda Pittman has been named as the Acting Chief of US Capitol Police following the resignation of former Chief Steven Sund, who resigned and left abruptly in the days after the siege on the US Capitol.

Pittman was the USCP assistant chief, and joined the department in 2001, US Capitol Police said. Her first assignment after joining the department in April, 2001 was to protect US Senators and dignitaries. Pittman will be the first woman and the first Black person to hold the position, according to Morgan State University, her alma mater.

Capitol Police announced Thursday that Chief Steven Sund would resign, entering an effective date of January 16. However, he had already left by the morning of January 10, NBC 4 News reported.

Pittman was in charge of security at Obama’s inauguration ceremony, Capitol Police said. At the time, she was a captain assigned to the Capitol Division as the Executive Officer. In that role, she oversaw 400 police officers and civilians.

Pittman holds a bachelor’s degree and a master’s degree, and is working toward earning her Ph.D. in Public Administration, according to USCP.

“Assistant Chief Pittman graduated from Morgan State University with a Bachelor of Science degree in psychology in 1991,” her profile says. “She earned her Master’s Degree in Public Administration from Marist College in Poughkeepsie, New York, in May 2019. She is currently working toward her Ph.D. in Public Administration from West Chester University. She completed the Federal Bureau of Investigation National Academy in December 2018, and graduated from the National Organization of Black Law Enforcement Executives’ CEO Mentoring Program in July 2018.”

Morgan State University was among the first to announce her promotion.

“Yogananda PittmanIn the wake of this past week’s horrendous and thwarted attack on the U.S. Capitol, I am pleased to announce that a decision was made to elevate distinguished and decorated Morgan alumna Yogananda D. Pittman to serve in the role as acting chief of the U.S. Capitol Police (USCP),” University President David Wilson wrote in a letter addressed to the Morgan Community. “This appointment is notable for our nation and our University, as she will be the first woman and first African American to hold the post of leading the USCP. We commend this wise decision as it is widely known that Morgan graduates are purposefully prepared to not only Grow the Future, but to Lead the World.”

He went on to congratulate Pittman for the achivement.

“I implore Morgan graduates and members of the Morgan family around the world to join me in a full show of support,” he wrote. “Together, we celebrate this recognition of leadership and congratulate one of our own, Acting Chief Yogananda D. Pittman, on her achievement. She is undeniably Morgan Made!”

As a commander, she supervised more than 400 officers and civilians, and led the efforts to provide the security footprint for the 2013 Presidential Inauguration,” USCP wrote.

Pittman has also served in accountability roles in the department.

“In December 2015, Assistant Chief Pittman was promoted to Inspector, and was assigned to the Office of Accountability and Improvement where she was the Chief of Police’s designee in responding to all of the Department’s civilian and sworn disciplinary appeals and grievances. In June 2018, she was promoted to Deputy Chief and was named Bureau Commander for the Command and Coordination Bureau,” USCP wrote.

The U.S. Capitol Police Board, which oversees security on Capitol Hill, was down to just one member on January 8. Pittman has now joined the board, and its new acting head is Jennifer Hemingway, who is also serving as acting Senate Sergeant at arms, according to NBC 4 News. Senate Majority Leader Mitch McConnell asked for and received the resignation of Sergeant-at-Arms of the Senate Michael Stenger resigned effective immediately at the request of Senate Majority Leader Mitch McConnell. Paul Irving, who was the longtime Sergeant-at-Arms of the House also resigned. The only remaining member of the board at the time was Capitol J. Brett Blanton. The board oversees a half-billion-dollar budget and thousands of employees, NBC 4 News reported.